The General Assembly Thematic Debate on Ensuring Stable and Peaceful Societies took place 24-25 of April at the United Nations in New York. In his opening remarks, UN Secretary General Ban Ki Moon noted that the UN is built upon three pillars: “peace, development and human rights.” He followed by highlighting that the post-2015 development agenda must consider how to promote stable and peaceful societies, as these three pillars are inherently linked.

To highlight this importance further, the Secretary General referenced the MY World Survey as the voice of people around the world asking for this issue to be addressed:

The UN My World survey on the post-2015 development agenda showed that protection against crime and violence ranks high among all population groups in all regions. Let us therefore work together to develop a post-2015 development agenda that will address the underlying causes of violence and conflict wherever they occur. Let us use sustainable development and human rights to provide the foundations for lasting peace. And let us build effective and trustworthy institutions, promote the rule of law and pay closer, earlier attention to human rights abuses. 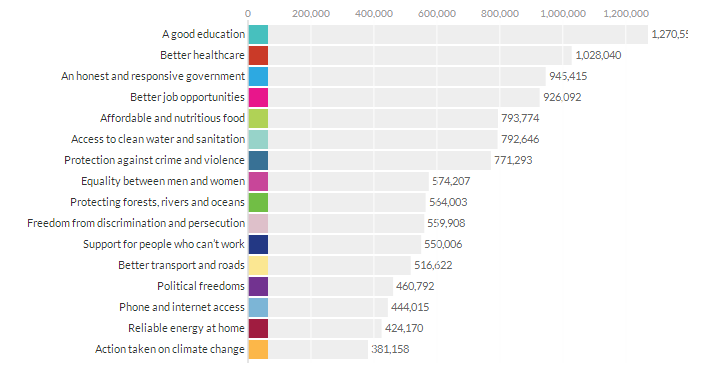 “Protection against crime and violence” ranks sixth in the MY World Survey amongst the 1,855,839 voters globally thus far.  These results are the same irrespective of age, gender, or education level, as it is either the sixth or seventh priority for all groups.

Voters in the Americas placed slightly higher priority on this issue, ranking it fourth. Those in Europe ranked it fifth, and those in Africa, Asia and Oceania it seventh.