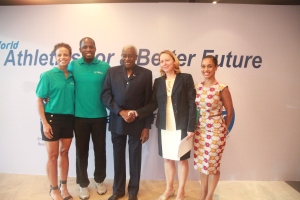 UNDP and the International Association of Athletics Federations (IAAF) co-hosted a celebration of the social responsibility program Athletics for a Better World (ABW) in Beijing’s iconic Bird’s Nest stadium on Aug 26th during the IAAF World Championships, Beijing 2015. The two organizations signed a memorandum of understanding to celebrate international partnerships in sports and cooperate to promote sustainable, inclusive human development to make the world a better place. This reception is a series of events UNDP is hosting to celebrate the UN Day for South South Cooperation.

UNDP invited members of the Beijing international diplomatic community to attend the event, which included delegates and representatives from over 40 Countries and many partner organizations. The Virtual Reality film screening became the highlight of the night. The UN Millennium Campaign office brought two VR films to the audience to demonstrate global development challenges from around the world. Launched in early 2015, the film Clouds Over Sidra follows the life of a young girl living in the Za’atari Syrian refugee camp in Jordan. Waves of Grace features a community’s recovery amid the Ebola epidemic. Both films were designed to support the UNMC’s efforts to highlight the plight of vulnerable communities.

Attendees explored the ground-breaking technology through the virtual reality headsets with enormous passion, and the powerful, immersive watching experience brought the real lives of people in Jordan and Liberia straight to the Bird’s Nest. The audience were profoundly moved and gained deeper empathy of vulnerable communities.

“The most amazing watching experience ever before.” Exclaimed one diplomat working in Beijing after watching the VR Film. He added, “It’s like they are looking at me and talking to me, they are around me.” 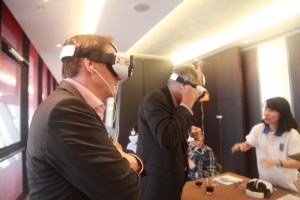 As the world’s second largest economy, China achieved many of the Millennium Development Goals ahead of schedule, and has become increasingly important in the overall global performance on the newly approved Sustainable Development Goals. In the MY World Global Survey, which aims to link voices of citizens to global leaders during the process of defining the new development agenda, Chinese people contributed 321,395 votes with a high level of involvement of youth. Better transportation and roads, support people who can’t work are the two most popular priorities among Chinese voters.

Greetings MY World and World We Want Partners,

With the beginning of a new year, we are pleased to introduce you to Mr. Mitchell Toomey, who has taken on the post as Director of the United Nations Millennium Campaign as of January 2015.

Prior to becoming Director of the Millennium Campaign, Mitchell held the position of Senior Adviser of the Knowledge, Innovation and Capacity Group in UNDP’s Bureau for Development Policy. He has led groundbreaking work using digital media and technology to engage the public and civil society organizations around the world in collaborative crowdsourcing of development solutions focused on bringing vital services to the poorest and most vulnerable populations. Mitchell also helped design and launch UNDP’s Global Innovation Facility.

No stranger to MY World and the World We Want 2015 initiatives, Mitchell led the technical design and implementation phases of these platforms and other e-consultations to strategically engage millions of people around the world to participate in the post-2015 development framework. These initiatives and consultations, with the support from partners around the world, offer tremendous insight on priorities for the next generations of global anti-poverty goals.

Before joining UNDP, Mitchell launched two start-ups, served as Executive Producer for an interactive marketing agency, and worked as a management consultant helping traditional firms leverage digital markets and business models. He is an American national and holds a Masters of Business Administration from New York University’s Stern School of Business and a BA in Philosophy.

2015 is a critical year for us to focus on the MDGs’ final push and to ensure that citizen voices are reflected in the new development framework, civil society-led citizen engagement on a local-level is more crucial than ever before. By using an innovative strategy, forging new partnerships, and strengthening existing ones, Mitchell hopes to lead the team to support government, civil society and other partners to build on the momentum generated by the MDGs and carry on with an ambitious and inclusive post-2015 sustainable development agenda. 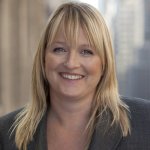 Happy New Year and thank you for your partnership with the UN Millennium Campaign whether through the MY World Survey, the World We Want 2015, the Open Defecation Campaign or the work our Africa team has led on Financing and Equity.

This year marks a watershed in many ways. The MDG’s deadline is upon us and we have much to celebrate in terms of tangible progress to meet the goals.We also have good cause to celebrate the work of the UNMC and partners to build powerful citizen led campaigns on the MDGs from the award winning Stand Up Campaign, through the policy work on maternal mortality and of course the MY World Campaign for the new development agenda . It is a good moment to take pause and assess what has worked and with all honesty what has not so that as we move to the new agenda we can build on everything we have done before.

We know that in 2015 the stakes are high. World leaders will be working towards two outcomes that will be critical for people and planet. The first in September is the creation of the next set of global goals to follow the Millennium Development Goals and the culmination of critical climate change negotiations in Paris. The work we have done in the last few years to bring citizen voices to the UN should not be lost.

Today marks the launch of the Action/2015 campaign – a year for citizen global action in the escalating action towards finalizing the MDGs, and in calling for the ratification of an ambitious and transformation new global development agenda. It is now that we need you to redouble your efforts to ensure that all those who have placed their dreams and visions in our hands are honored. We owe the countless volunteers who have taken bikes, trains and have walked to gather voices from the most remote location to ensure world leaders hear these voices. You have gathered the voices and I trust you will use them.

It has been an honor to lead the UN Millennium Campaign over the past 4 years and as I transition to the UN Foundation to intensify their support for the work of Amina Mohammed, Special Adviser on Post-2015 Development I will stay in contact with many of you. 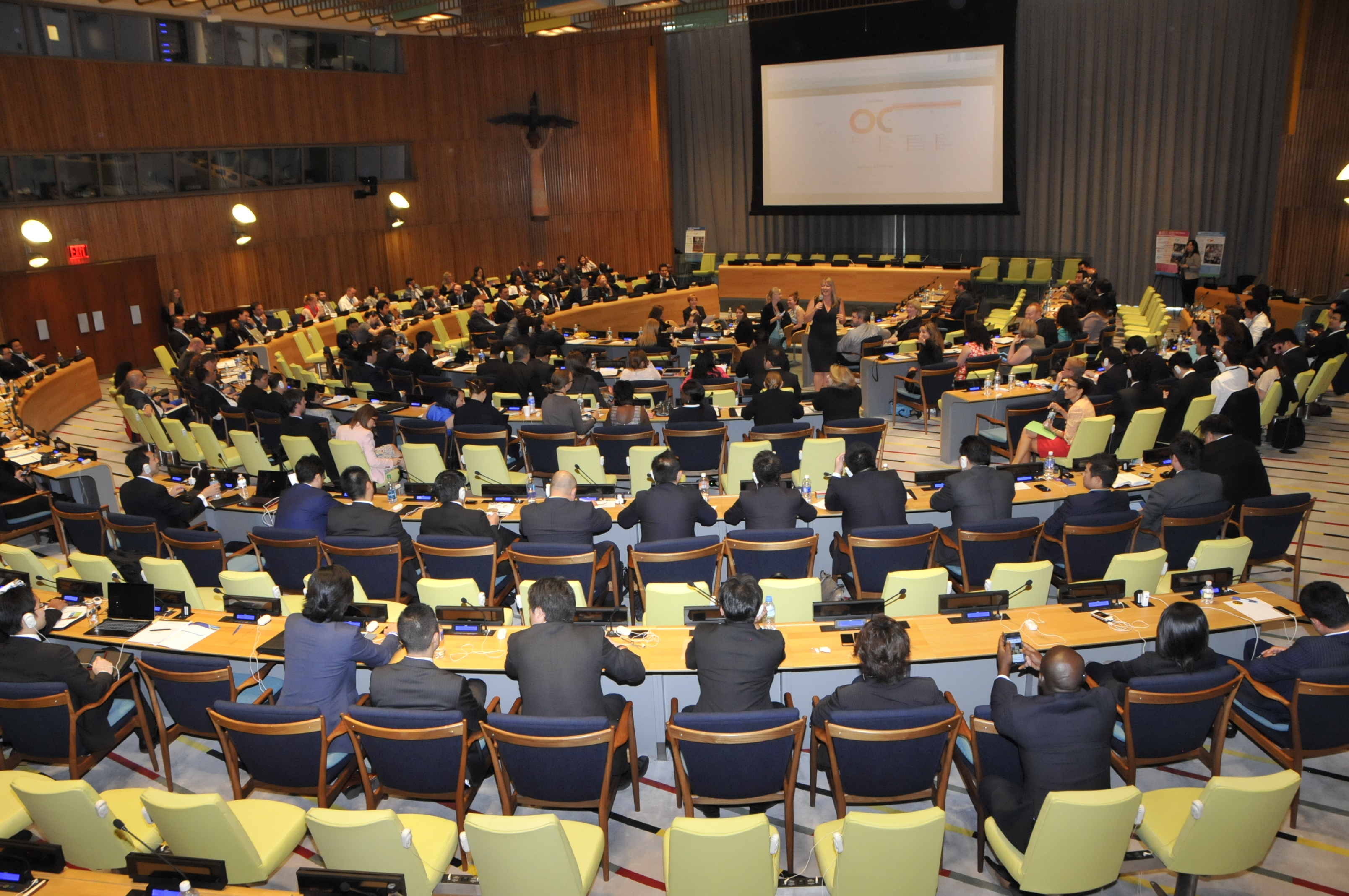 Nearly 500 young active citizens from over 50 nationalities united inside the United Nations at the annual Junior Chambers International 2014 Global Partnership Summit. JCI seized this significant, timely opportunity to discuss the final push for the advancement of the Millennium Development Goals (MDGs) and explore opportunities on shaping the post-2015 development agenda. With young people joining together to increase cultural understanding and create positive change, the event was an essential gathering to engaging active citizens from all sectors of society to formulate strategic partnerships for sustainable impact. “The Millennium Development Goals represent the greatest single anti-poverty campaign in human history,” UN Assistant Secretary-General and Special Adviser to the Secretary-General Kim won-soo said.

With the MDGs as a global framework to fight poverty, it will take the combined effort of governments, the private sector and civil society to develop a successful strategy and create measurable results.  The 2014 JCI Global Partnership Summit united leaders and representatives from all sectors to address and formulate sustainable approaches to development. The UN Millennium Campaign plays an integral role in engaging young active citizens by listening to their voices and providing the platform for taking targeted action, advocating for the MDGs and the post-2015 global development agenda. As young people around the world focus on the MDGs as a targeted approach to addressing challenges, strategic JCI partners recognized the importance of long-lasting collaboration.

END_OF_DOCUMENT_TOKEN_TO_BE_REPLACED 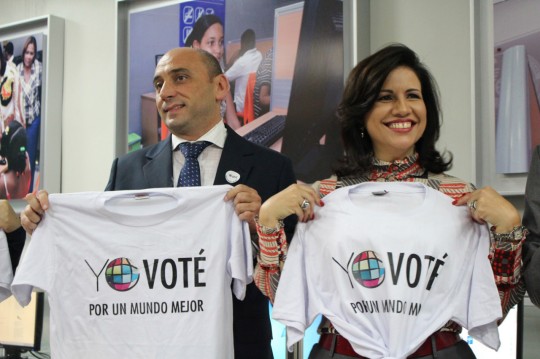 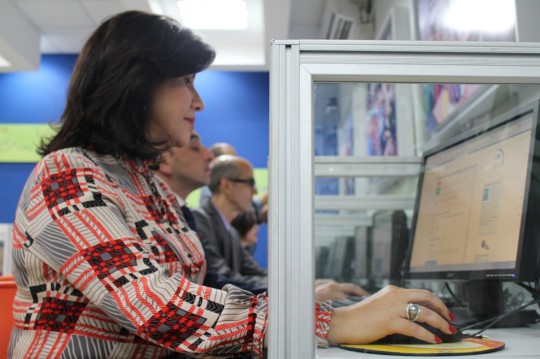 Next week is the Dili International Conference on the post-2015 agenda, which will take place from the 25th-28th of February. This will help fill something of a gap identified in post-2015 discussions to date, by bringing attention to the priorities of fragile and conflict affected states.

The focus of the conference is “Development for All: Stop conflict, build states and eradicate poverty”, and it aims to:

“provide a country-owned and country-led forum for representatives of the g7+ and Pacific Island countries to contribute to the international conversation about the focus of development beyond 2015. The dialogue will offer a chance to connect principal stakeholders; promote fraternity between the members of the g7+, Pacific Island countries and development partners. It will provide an opportunity to test ideas and build trust, understanding and consensus for action around the areas of mutual interest for inclusion in the post-2015 development agenda.”

This conference also reflects the policy priority among the g7+ group of countries to ensure that the needs of fragile and conflict affected states are reflected in the post-2015 development agenda. The g7+ is a country-owned and country-led global mechanism to monitor, report and draw attention to the unique challenges faced by fragile states. The goal of the g7+ is to “stop conflict, build nations and eradicate poverty through innovative development strategies, harmonized to the country context, aligned to the national agenda and led by the State and its People.”

A recent speech given in Monrovia by Chair of the g7+, Her Excellency Emilia Pires, is available here, and provides additional background to some of the post-2015 priorities that will be on the table at the conference.