After thousands of kilometres of dirt roads, small mountain paths, jungle trails and deserts, through 20 countries on two continents, UN Youth Delegate Jilt Van Schayik and Teun Meulepas arrived to Cape Town, South Africa! Throughout this six-month cycling odyssey from Amsterdam to Cape Town, aimed at hearing what people – and youth in particular – have to say about the development of the new United Nations Sustainable Development Goals through MY World, Humans of MY World, HeforShe Campaign, and Building Bridges Youth consultations. UN Women Executive Director Phumzile Mlambo-Ngcuka and Cape Town Mayor Patricia de Lille attended a ceremony to mark the end of their journey on 12 August, International Youth Day.

Armed only with the gear that fit on their bicycles, a computer and a camera, they worked with young ambassadors in each country to organize forums and consultations discussing gender issues as well as results from the MY World Survey so as to understand the specific development priorities of young people in each country. They also visited community initiatives, and involved people they met along the way from rural and urban settings through a photo series called Humans of MY World. They accomplished the trip with very modest means, relying on the kindness of strangers and many times sleeping in the homes of those they met along the way.

END_OF_DOCUMENT_TOKEN_TO_BE_REPLACED

Building Bridges kicked off in The Netherlands! From now until August, Jilt van Schayik (UN Youth Representative for The Netherlands) and Teun Meulepas will be cycling from Amsterdam to Cape Town. During this six month bike tour, they will cross 20 countries and over 15,000km (over 9,000 miles) to hear stories and collect MY World votes.

From the vast deserts of the Sahara to the central highlands of Namibia, from rural communities to crowded metropolises, and everywhere in between, Jilt & Teun want to connect with young people on the ground, share stories and inspire one another to make changes for the world we want. The duo have teamed up with youth representatives from every country who will be organizing events around their arrival to spread the word about MY World as the voice of the public to the UN. They will take photographs for Humans of MY World, gather MY World votes, and organize forums with young people. They will try to answer the question: “How do young people at the grassroots level envision the world in 2030?” ‪

2015 is an important time to activate the voices of the public to ensure that the sustainable development goals reflect the people’s needs and interests. As we look at the outcomes of the Millennium Development Goals, which come to a close on December 31, 2015, will the public feel that their governments made great strides in areas such as gender equality, sanitation, and the environment? What are the areas of continued need? These questions can only be answered by asking the people and sharing their votes and their voices.

These young men have long road ahead of them! Follow their adventure and show your support between now an August. Connect on Twitter with #bb2015UN and on Facebook at Humans of MY World & Building Bridges!

Building Bridges & MY World was featured on Dutch television! 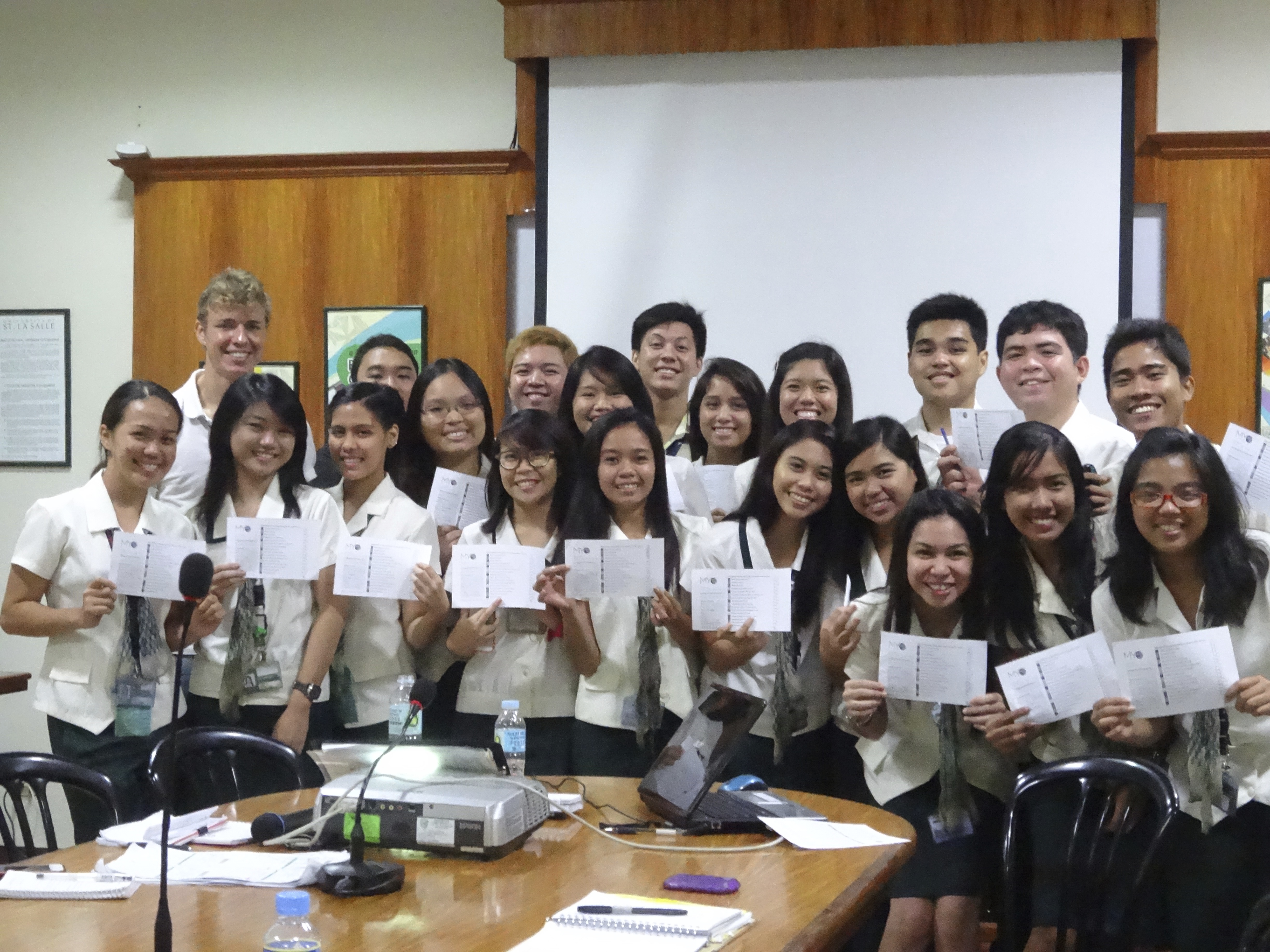 By the Balayan Social Action Office of the University of St. La Salle and the Sagay City Government.

International Youth Day 2014 brought together more then 150 youth leaders and activists at the University of St. La Salle for discussions on the post-2015 development agenda, the My World Survey and gender equality.

The day started with a message of inspiration by Jilt van Schayik, the Dutch Youth Delegate to the United Nations. “Leave your footprint behind, be part of the solution and act as leader of today, not for the future only” were among the messages he shared.

The forum then continued with a discussion on the post-2015 development agenda in which youth leaders from different backgrounds shared their ideas, solutions and best practices for the world of tomorrow. The main priorities and areas of concern were: education, healthcare and job opportunities. This is in line with the outcome of the MY World Survey in the Philippines were those priorities rank the top three.

Take away from International Youth Day in the Philippines: young Filipino’s want to shape their own future, and with them 1.8 billion youngsters around the world. 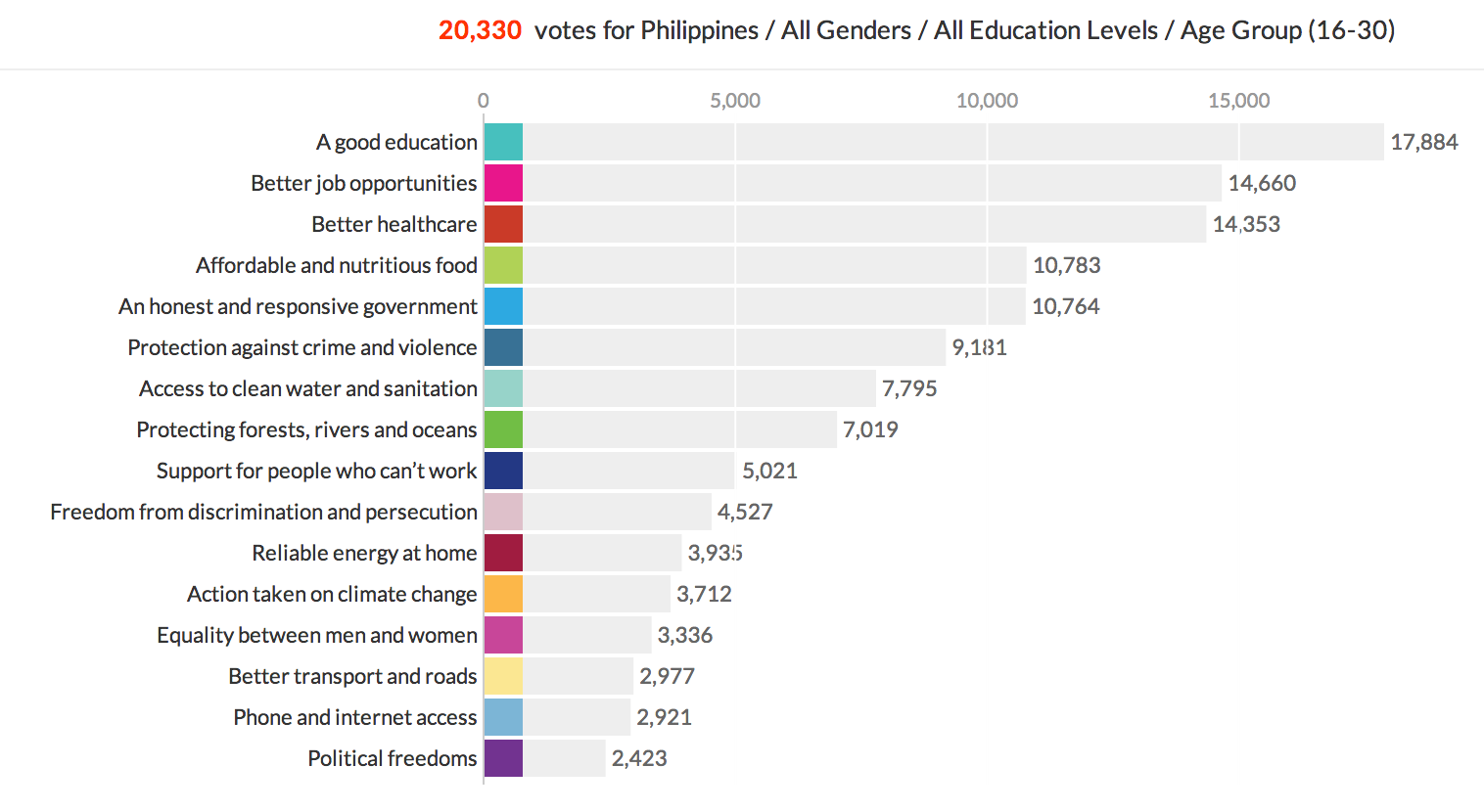