Have you ever had the chance to go scuba diving with whales? How about hanging out with penguins in Antarctica? Have you heard the personal stories of those working on the front lines of ecological activism, such as scientists and indigenous people?

Would being exposed to these experiences help you to become a stronger and more informed advocate about the ocean, or SDG 14, Life Under Water?

To support the Governments of Fiji and Sweden in their mission to inspire advocacy and action for SDG 14 during the Ocean Conference, 5-9 June, UNVR curated a playlist of some of the best in 360’ video and interactive virtual reality to transport viewers to the coasts and deep waters of the sea, bathing them in the sights and sounds of the ocean. 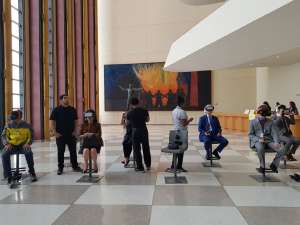 “We have two and a half years’ experience organizing VR exhibitions that transport policy makers into the development challenges the SDGs are seeking to alleviate, especially at UN forums. This is the first time we have brought together multiple VR experiences that coalesce focus on one SDG, in this case SDG14: Life Under Water. The diversity of issues covered provide visitors with a broader context, a choice of issues they can champion, and actions they can take.” said Kristin Gutekunst, Executive Producer of UNVR for the UN SDG Action Campaign. 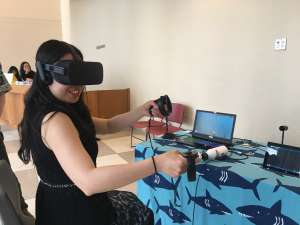 Curated and produced by the UN SDG Action Campaign, the exhibition is powered by Samsung and includes content collaboration with the Permanent Mission of France, the Cultural Services of the French Embassy and through the generous permission of many VR Creators.

The exhibition will feature the following experiences (detailed information here: http://unvr.sdgactioncampaign.org/ocean-conference), some of which are exclusively available at this event: