70% of Filipinos feel the situation on the Sustainable Development Goals of most concern to them – poverty, hunger and good health & wellbeing – has not improved in the last twelve months.

More has to be done if we want to achieve the Goals by 2030, and the Philippines is a good example of it. PepsiCo, Paragon Partnerships and the UN SDG Action Campaign conducted a representative survey among 10,000 Filipinos to look at their awareness of the SDGs and their perception on how the situation on the most important issues for them and their families has developed in the past year.

The survey revealed that awareness of the Sustainable Development Goals signed by 193 World leaders at the UN in 2015 was very low among people in the Philippines, at just 5.9% of the total numbers interviewed. And more importantly, the lower the socio economic demographic, the awareness decreased further. 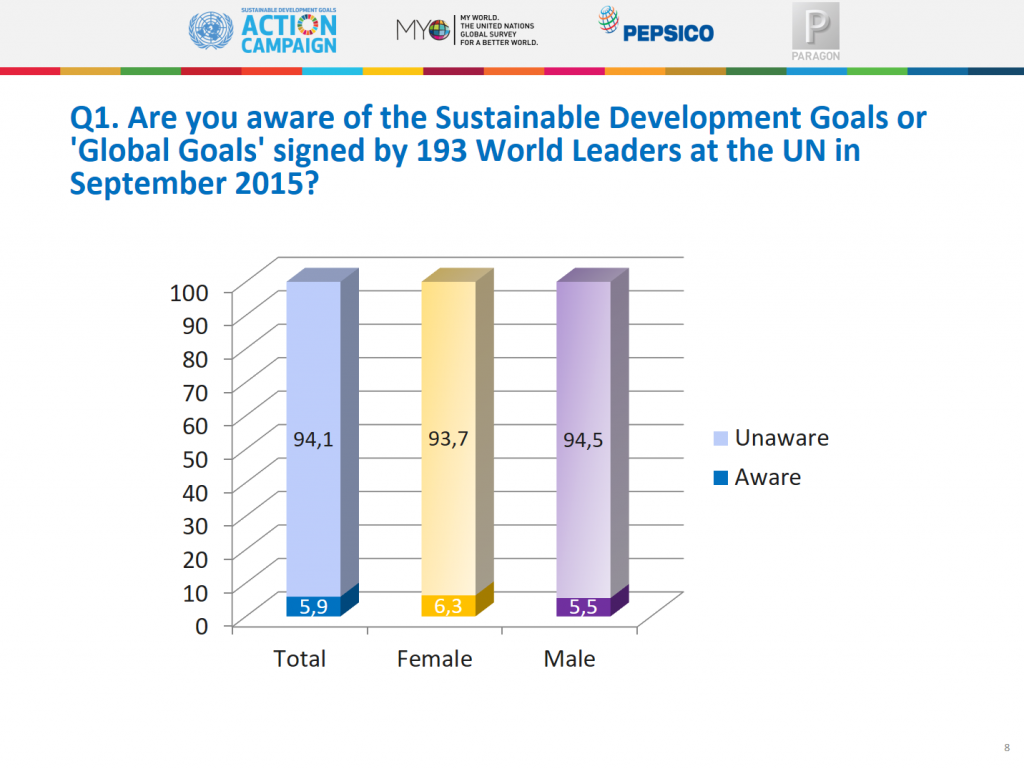 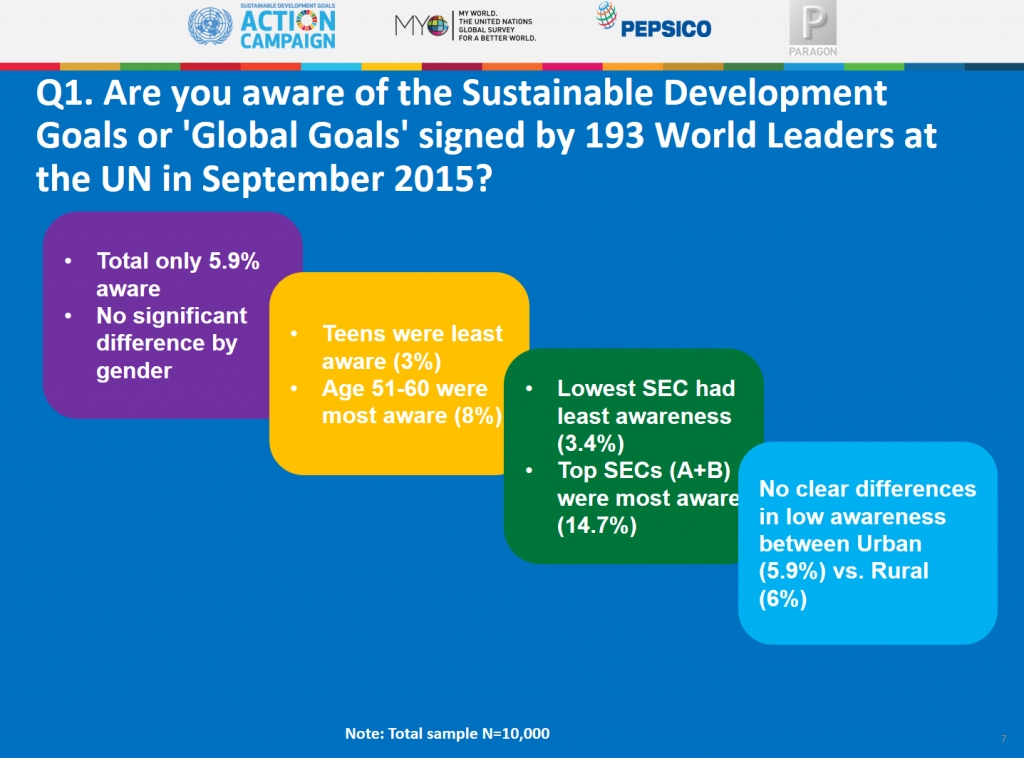 Anand Kantaria of the UN SDG Action Campaign said “This latest data demonstrates that more has to be done in communicating the SDGs to the most marginalised communities, ensuring that no one is left behind. Multistakeholder partnerships such as this one with PepsiCo and Paragon help us gather critical timely data on progress and feed people’s’ perceptions into decision making at all levels”.

Pamela Forbus, PepsiCo SVP Global Insights & Analytics, said “We are proud to partner with Paragon Partnerships and the UN SDG Action Campaign in the effort to collect data and insight to improve people’s lives. This important work is aligned with PepsiCo’s strategic vision, Performance with Purpose, which began over a decade ago and is rooted in the fundamental belief that business success is inextricably linked to the sustainability of the world we share.”

The survey also indicated that SDG 1 – No Poverty, SDG2 – Zero Hunger and and SDG3 – Good Health & Well Being are the primary concerns to Filipinos. When asked about how the situation has evolved for these specific Goals, the vast majority (68.2%) felt that the goals of most concerns to them had not changed in the past 12 months, while just over a quarter (28%) thought they had improved over the same period, and only a small percentage 3.8% of the interviewed Filipinos felt the Goals that they were most concerned about had got worse, with the lowest socio economic classes being the least optimistic about any positive changes. 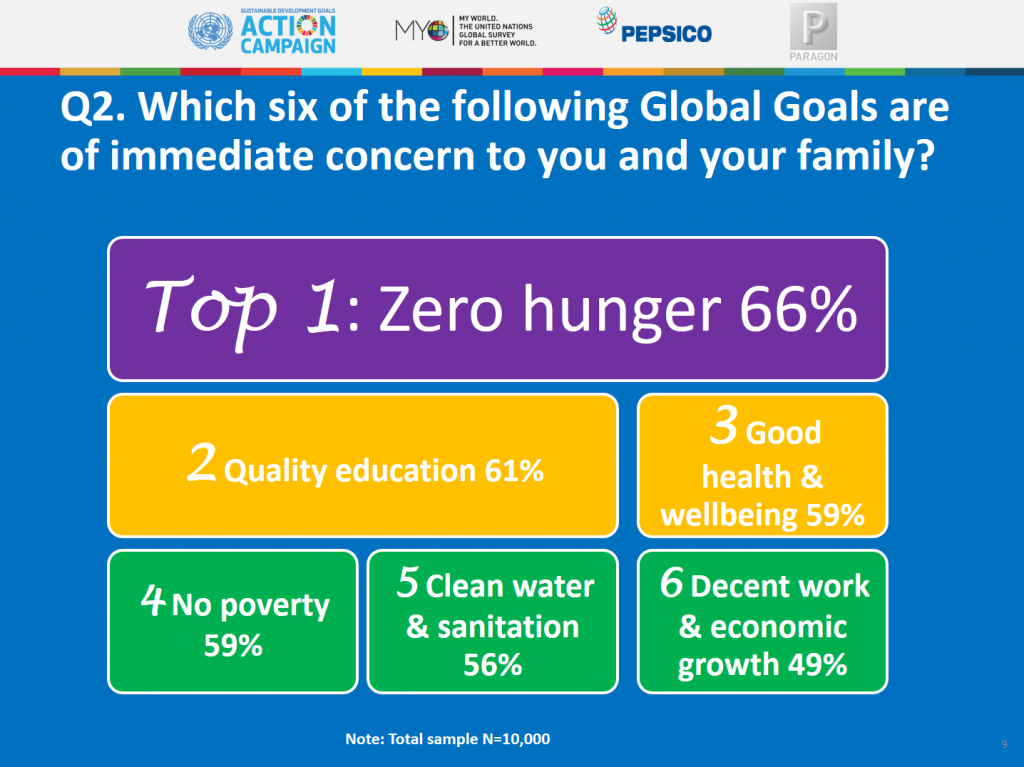 The survey was conducted as part of PepsiCo’s Demand Science project in the Philippines. PepsiCo included three MY World 2030 questions in partnership with the United Nations SDG Action Campaign for this Paragon Partnerships project.

Dilek Ozler of Paragon said “PepsiCo is an active contributing member of the Paragon Partnerships, committed to using data and insight to improve people’s lives.  As Paragon, we are proud to be providing a platform where market researchers around the world and countries/ governments come together to measure the impact of the actions towards sustainable development.  Without measurement, it would not be possible to see real progress and keep ourselves responsible.  Our hope is that more country governments take the opportunity to work with Paragon, not only to measure the progress of SDGs in their countries, but also to use market research to help feed their policies to implement SDGs.  Knowledge and citizen insights are key for the implementation of SDGs.”

Dig deeper into the results of the survey here.

To explore other results and how people think about progress on the SDGs click here.