The UN Youth Booth was among the exhibits located at the COP22 Blue Zone, where various event booths were being showcased for visiting participants during this year’s conference in Marrakech. The UN Youth Booth, by working with the SDG Action Campaign, showcased some of the various initiatives made to translate the global Sustainable Development Goals (SDGs) into local languages. Members from CSAYN Ethiopia and CSAYN Cameroon showcased various local youth-led initiatives of afforestation programs to raise awareness for the power of youth mobilization. The groups also explained the UN virtual reality programme, which helped to break the language barrier; this breakdown has proven to be an imperative objective for creating inclusive participation of local peoples, such as farmers and marginalized communities with less access to education.  This is an effort to leave no one behind in this global effort.

Reactions varied from emotional to excitement from people who watched the virtual reality films, but everyone thought the technology was a wonderful way to engage people from around the world in ongoing humanitarian issues, especially in places they would otherwise never experience.  Delegates who tried the virtual reality were extremely impressed with the innovations presented, and many said it’s the first time they had seen VR apart from online demonstrations.

Various surveys to gain insight of conference participants’ knowledge of and perspective on the SDGs were conducted at the UN Youth Booth. Youth delegates who took the “MY World 2030” survey gave their feedback as to what they think is the most crucial SDG. The survey went on successfully, and most delegates identified the following six goals as their top priorities:

In Conversation with Mr. Ntiokam Divine from Cameron, on David Nabarro, the UN Special Advisor on 2030 Agenda for Sustainable Development:

It was a privilege speaking to Mr. Nabarro and he was so excited and proud to have  advocates pushing the 2030 Agenda for SD at all local, national and regional levels, and in local languages. He gave me guidelines on how to ensure no one is left behind in achieving the Agenda 2030 for Sustainable Development. He promised to personally support our efforts at country level as well.

In conversation with Youthink delegate from China:

This was a great opportunity to liaise with the youth delegation from China, and we were able to share presentations on tree planting activities carried out across Cameroon, Uganda and the Philippines by Ntiokam Divine, volunteers and the coordinators and founders of CSAYN. Later, we shared the VR experience with them, and the youth present were very supportive of planning for COP23 by coming up with similar innovations.

Various groups, mainly consisting of civil society participants present for COP22, gathered for a 3km climate march to show solidarity and voice common concerns on the effects of climate change and urge government action to be taken immediately. The Climate March was a significant accomplishment, especially for a lot of non-state actors and civil society groups in voicing their demands and reminding the world once more of the severity of the situation and the actions that decision makers should take and enforce. In conjunction with fellow youth and civil society activists, members from PACJA (Pan African Climate Justice Alliance) and the African Initiative on Climate Change (AYICC) showed a high visibility and presence to represent and voice Africa’s demands on behalf of civic society and youth. At the forefront of the demands was the expressed need for implementation, action and enhanced commitment on the Paris Agreement by signatory parties. 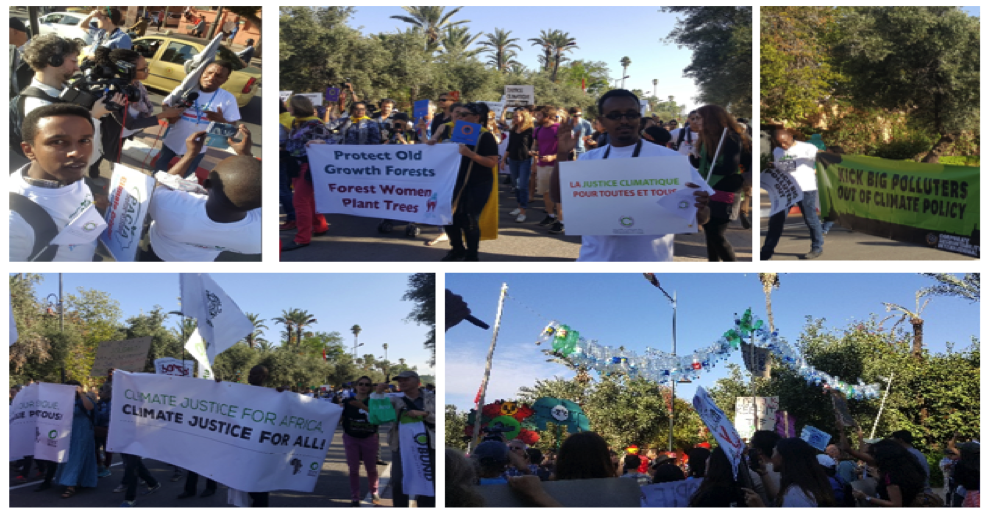 The African Youth Initiative on Climate Change (AYICC) hosted its side event panel discussion at the COP22 Green Zone on November 15th. The theme of the discussion was “Making Climate Finance Work for Youth in Africa.” The side event was productive in bringing African youth at the COP together and also to engage with other youth from Europe, Asia and North America for exchanging experiences and best practices. Among many highlights, a detailed brief from Mr. Ibraheem Ceesay (Chair of AYICC) focused on some of the major continental youth funding mechanisms and opportunities that already exist for young Africans to tap into. Abiy Shimelis (AYICC East Africa) – pointed out the importance of young people’s proactive role in following up climate finance within the local context of their country and seeking ways on how it can be an input for youth capacity building especially towards adaptation.

A briefing session with the Executive Secretary of the UN Economic Commission for Africa H.E Dr. Abdulla Hamdok took place alongside a team from AYICC and ACLYP.  The session was instrumental in consolidating the various ongoing activities, prospects and challenges during the COP22 on behalf of the African Group of Negotiators (as briefed by Dr. Seth Osafa), African Civil Society movement (as briefed by PACJA) and the African Youth (as briefed by AYICC). 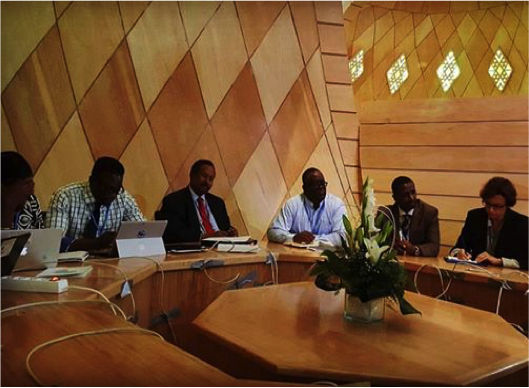