Master’s and doctoral students as well as faculty of the Education Academy of Computational Life Sciences (ACLS) International Summer School engaged on harnessing technology and data for the implementation of Sustainable Development Goals (SDGs) at the United Nations headquarters yesterday, 29 August 2016. 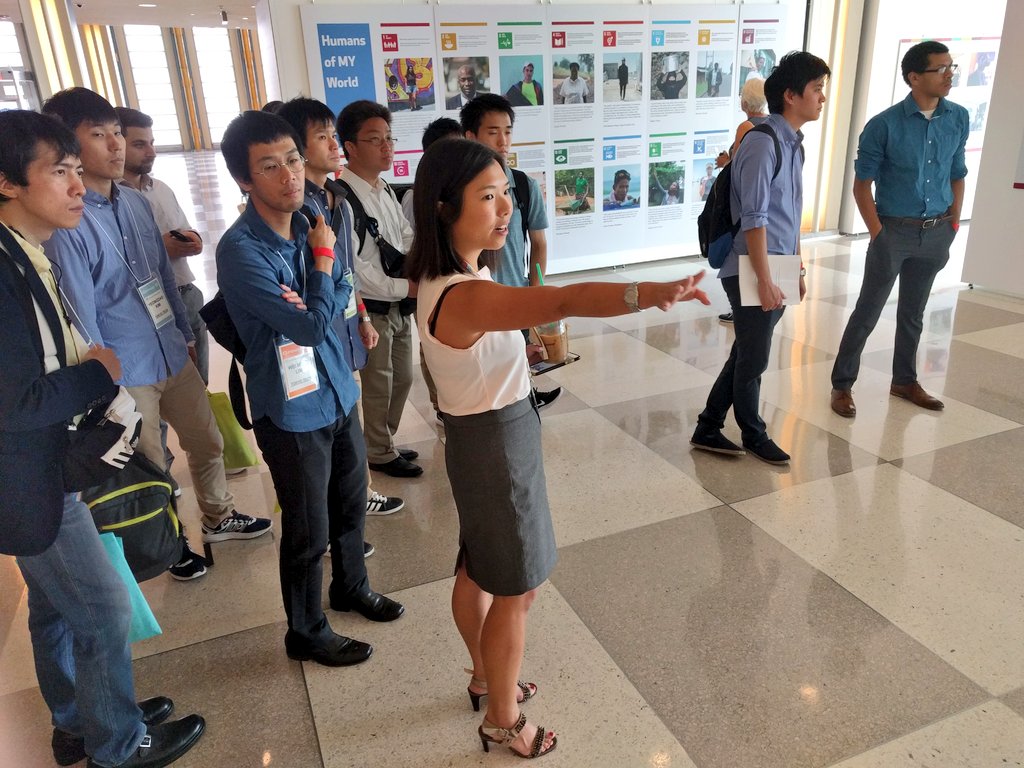 ACLS International Summer School delegation visits “SDGs: A People-powered Agenda – Leave No One Behind” exhibition at the United Nations Headquarters

This year’s ACLS International Summer School, led by Professor Yutaka Akiyama,Dr. Eng. and Professor Takashi Harada, jointly hosted by the Tokyo Institute of Technology and Cornell University, has the thematic background of the Sustainable Development Goals. Therefore, students and faculty took a special tour of the SDGs: A People-powered Agenda – Leave No One Behind exhibition at the United Nations Headquarters, experienced the UN Portal installation and the UN Virtual Reality film series, before participating in a workshop and discussion on the SDGs. 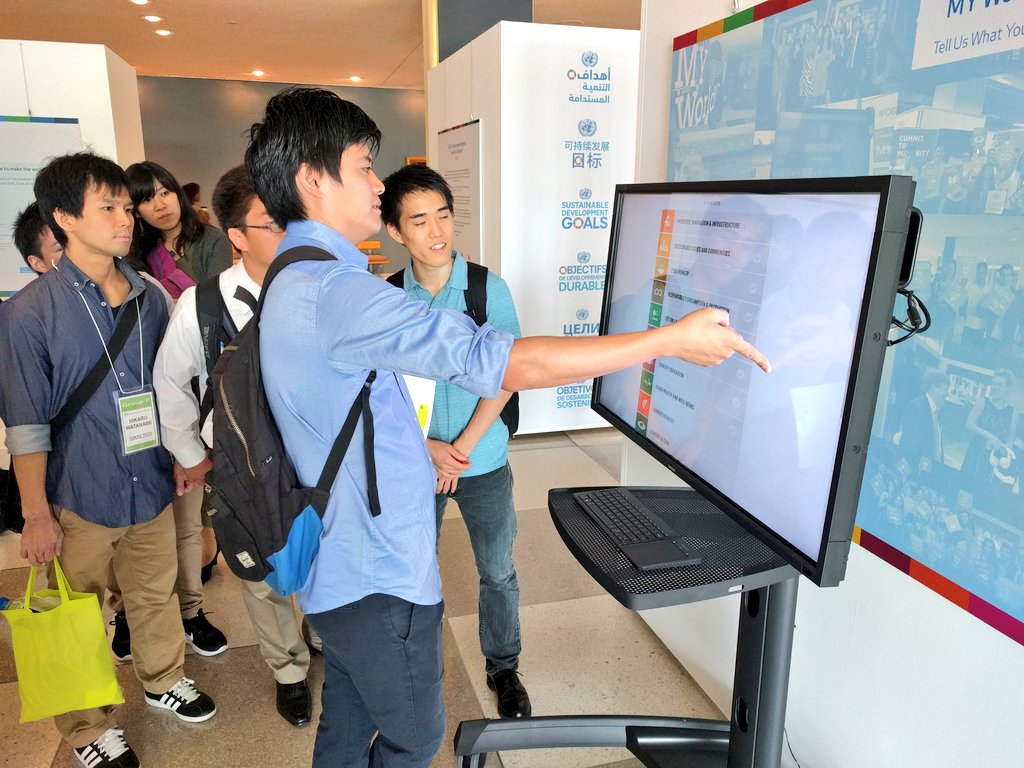 Participants vote in the MY World 2030 Survey at the exhibition

At the interactive exhibition, Summer School participants voted in the MY World 2030 Survey, the High Level Panel on Women’s Economic Empowerment’s special MY World 2030 Empower Women Thematic Survey and wrote their commitment to the SDGs on the blackboard. After experiencing the human stories behind today’s pressing challenges through the UN Virtual Reality film series, students were able to converse live with internally displaced people (IDPs) inside the Harsham camp on the northern edge of Erbil, Iraq, through the UN Portal. Harsham is a camp that hosts more than 1500 internally displaced Iraqi families who fled Mosul and its surrounding villages to escape Islamist militant attacks. 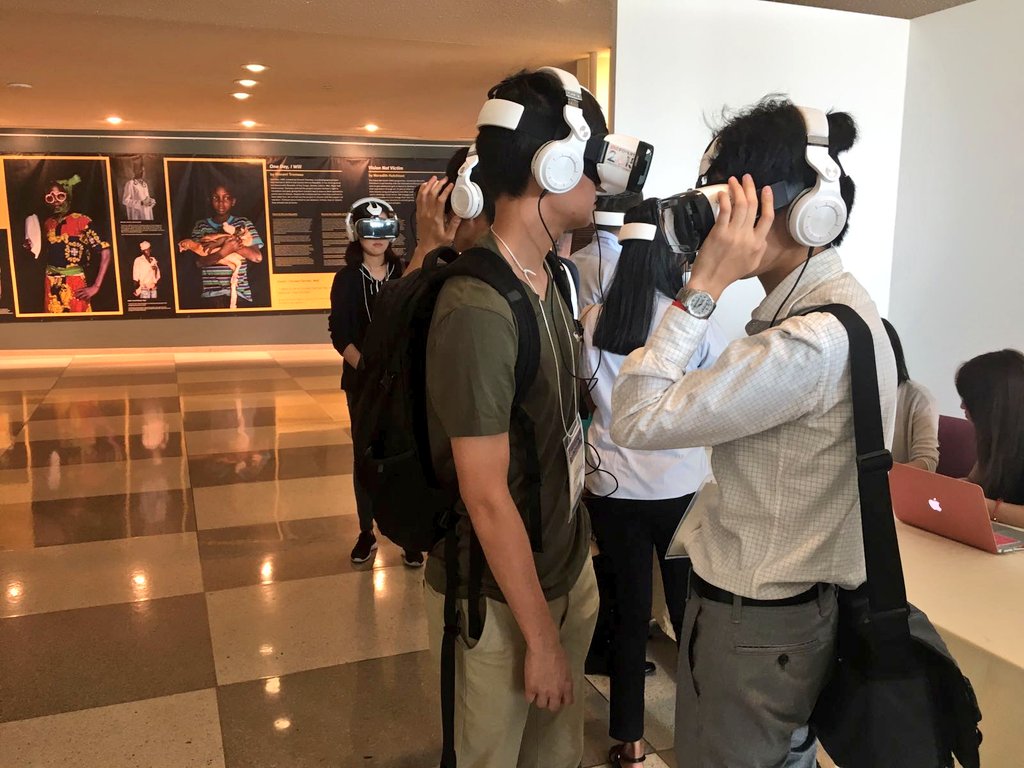 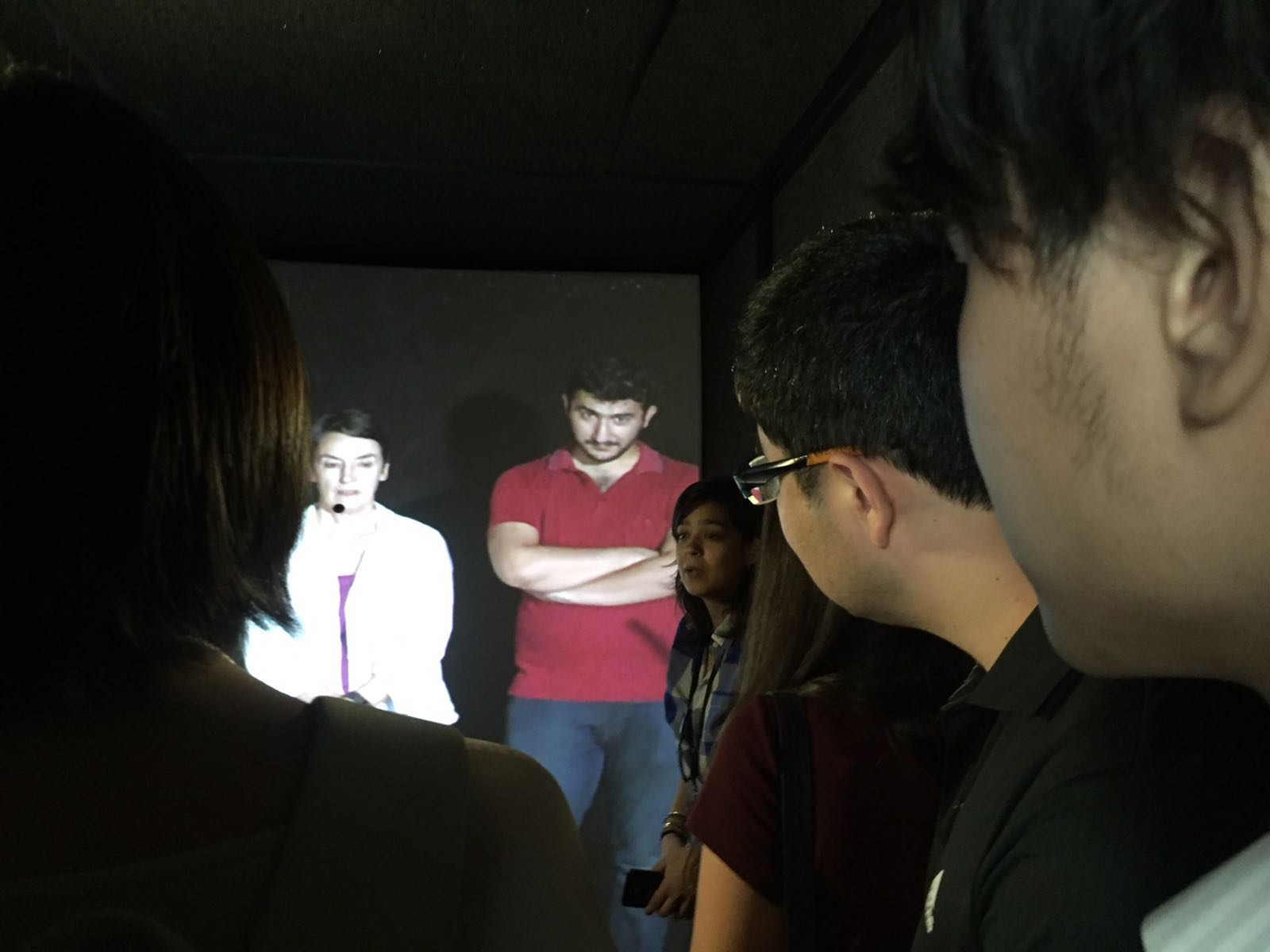 Faculty and students inside the UN Portal speaking live with IDPs in Harsham, Iraq 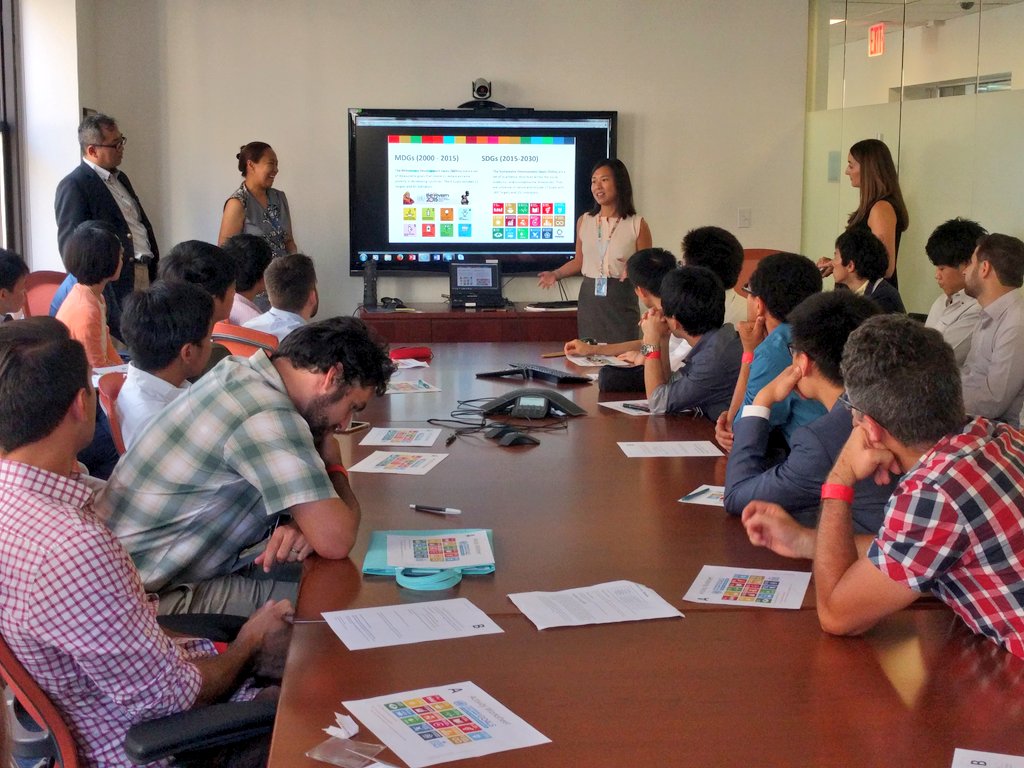 Antje Watermann, UN DPI, provided an overview of the SDGs framework and communication strategies for advancing them. In particular, she highlighted the interconnected, universal, inclusive and transformative nature of the 2030 Agenda.

The UNDP Gender Team’s Henny Ngu spoke on utilizing technology to achieve gender equality. Sustainable Development Goal 5, “Achieve gender equality and empower all women and girls”, tasks UNDP to contribute to the eradication of poverty and the significant reduction of gender inequalities by empowering women and promoting and protecting their rights.

Alice Chen, UN SDG Action Campaign, presented on how students and scholars can get involved in SDGs implementation and advocacy, especially by drawing upon technology and data. For instance, the Campaign’s MY World 2030 Survey is a tool for localizing, monitoring and promoting accountability of the new agenda through 2030. In addition, exhibitions and data playgrounds have provided interactive displays of citizen-generated data and storytelling initiatives on the SDGs, as well as videos and new media content on the SDGs worldwide. Furthermore, United Nations Virtual Reality amplifies the voices of the most vulnerable in danger of being left behind, allowing them to narrate their story from their own perspective and in their own words.

UNDP Sustainable Development Team’s Yuqiong Zhou concluded the workshop by outlining UNDP’s work on integrating the SDGs and the ways they will programmatically support countries to achieve the 2030 Agenda. 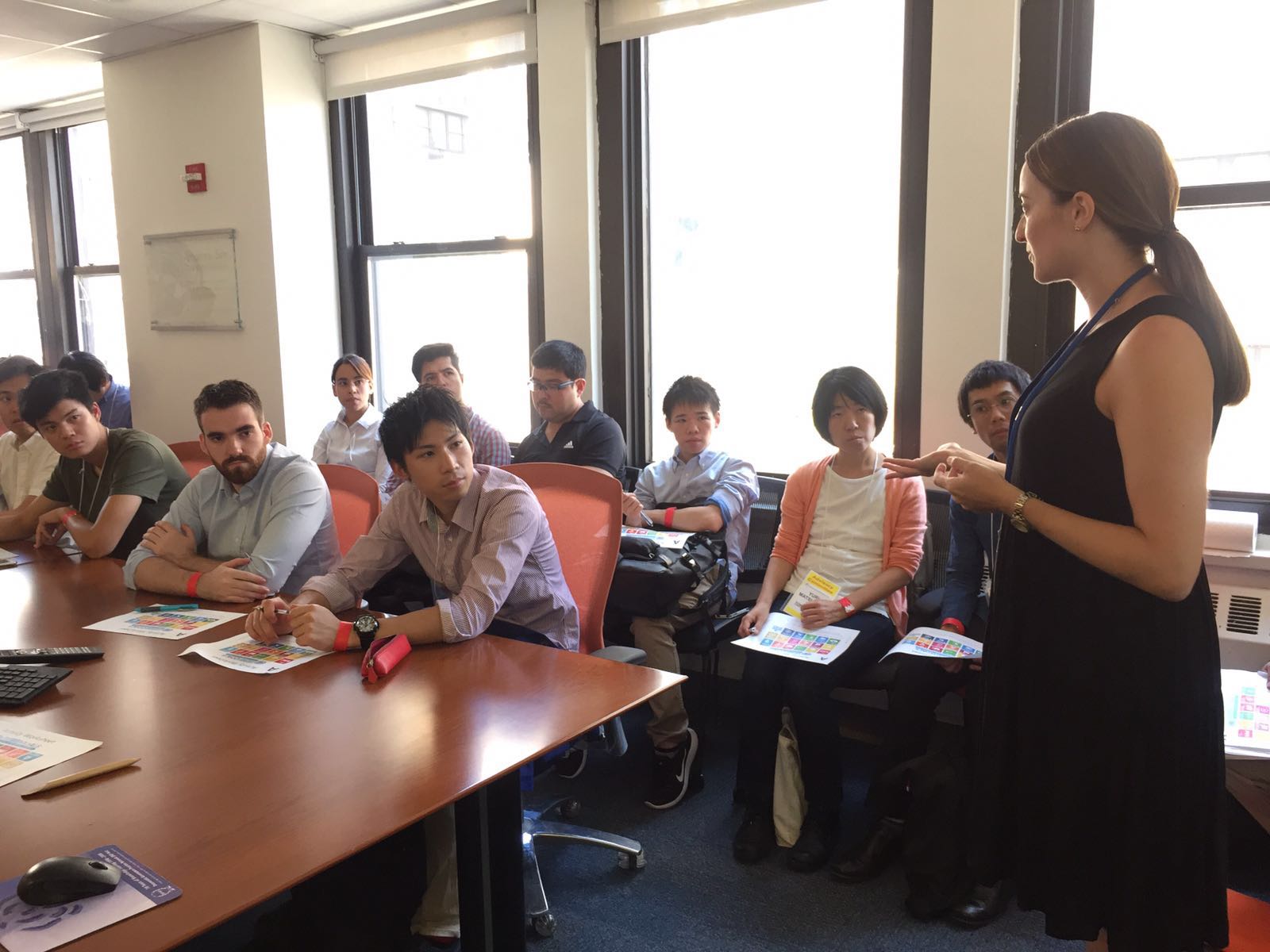 Antje Watermann, UN DPI, discussing with students and faculty how academia can contribute to SDGs implementation

The presentations were followed by enthusiastic discussion by student and faculty. The audience was particularly interested on how the indicators would be measured, the expectation from different Member States in terms of how they would work towards achieving the SDGs, and most importantly, what scholars can do to contribute to the realization of the goals by 2030!