Six months have passed since the implementation of MY World began in Jalisco, Mexico. Over 100,000 votes have been collected in 35 municipalities, and more than 50 institutions have joined our efforts. We are still mobilizing thousands of votes all over the state to reach our 200,000 goal thanks to the incredible work of many of our partners in the public and private sector, along with the fantastic contributions made by dozens Civil Society Organizations. Other states within Mexico such as Oaxaca, Durango, Veracruz and Michoacán have also had small contributions thanks to Jalisco’s volunteer team. 43% of our voters are young people 30 and under, and 52% are women. The six most voted priorities are A good education; Better job opportunities; An honest and responsive government; Protection against crime and violence; Better healthcare and Affordable and nutritious food. 300 young volunteers from 70 institutions – nearly 70% of them women – have been the main drivers of this remarkable citizens’ initiative. For the first time since the adoption of the Millennium Development Goals and the construction of the Post-2015 Development Agenda, Jalisco’s population works along the United Nations to advocate for real, democratic and inclusive sustainable development policies.

MY World volunteers in Jalisco have demonstrated that resources and financial constraints are not an obstacle to have everyone represented, especially the most marginalized and vulnerable communities. Over 85% of the entire voting process has been implemented offline, ensuring that the voices of the unheard are fully reflected in the results. Volunteers have received basic materials to undertake this survey, but most of the resources such as transportation or access to certain facilities, has been covered by them. 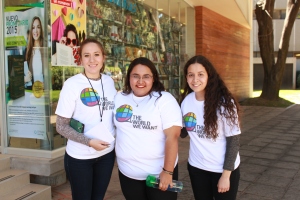 All partners involved have been highly impressed with the process led by volunteers in dozens of institutions. There is a very genuine and unique feeling among the team that this will serve as a real platform for change. MY World, has not only been able to bring direct involvement of the population in the process towards the adoption and follow-up mechanisms of the Sustainable Development Goals at the local level, but has also strengthened the role of the United Nations in Jalisco. Never before has the population of our state felt identified or included in a process led by an intergovernmental organization. After the MY World process, we are certain that the population is now more aware of what will happen in September 2015 and will be able to say ‘my voice was represented’. 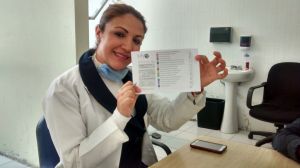 All members of our team along with the numerous partners that joined us in this effort have a clear commitment towards the inclusion of the results in effective and feasible public policies.

Despite all of our great achievements as a team, we have been also able to identify some of our greatest challenges, which relate to the overall feeling of need and vulnerability our population faces. Many voters feel left out of policy-making, especially those living in impoverished urban settlements; others feel gender equality is far from existing, while others do not think the government will take action to provide basic services and secure human rights.

From our 22-year old volunteer, María Fernanda Flores Álvarez, “My best experience as a MY World volunteer in Jalisco has been the ability to talk to people which believe their voices have never been considered before. From children, to people with disabilities or elders, many of them were surprised that for the first time the United Nations asked their opinions to build a better world.”

From our 20-year old volunteer, Andrea Guadalupe García Martínez: “MY World has not been an easy job, as I feel that I bear a responsibility that goes beyond a simple piece of paper. For me, the greatest motivation behind the hard work is to look at all those children that look at me after explaining the survey and say ‘I trust you and your world to build a better world’. It is also motivating to know the stories behind every voting card, and to realize that not all realities are the same as ours. It does not really matter if you struggle with the implementation process, especially when we have to transfer thousands of votes, what matters is to know you are doing something good for your own people.”

From our 18-year old volunteer, Brenda Marilú González Sánchez: “It has been quite an experience due to the fact that some people are still shocked that someone will ask them about the kind of world they want. They do not feel confident about the actions the government will undertake with the results and in some occasions people refuse to answer the survey. However, it was my job as part of this team to let the people know that another citizen just like them would be responsible of taking their voices to decision-makers with the strong support of the United Nations.”

All of our volunteers have not only gathered votes; all of them are part of a transformation that seeks to build better lives for all and a sustainable future. As our deadline approaches to collect 200,000 votes, we are sure that all of these remarkable individuals will continue to take the survey’s results to all possible platforms that allow us to know not only about the kind of world we want, but thow we can work together to achieve this goal.