Text and photos by UNV/Riikka Suhonen

Riikka Suhonen, from Finland, has served as international UN Volunteer in Bhutan, advocating for the recognition of volunteerism as a vital component of the Post-2015 development agenda and its implementation mechanisms. As part of her assignment, Riikka organized an advocacy campaign on youth volunteerism for Post-2015 with support from UNDP Bhutan and the Bhutan UN Resident Coordinator’s Unit. From May to June 2014, the campaign raised awareness on the UN and the Post-2015 process among young Bhutanese and promoted youth volunteerism for development in Bhutan.

“MY World proved to be a good way to introduce the theme of Post-2015 to young Bhutanese and to connect it with volunteerism as a way to become active citizens”, says Riikka. “In ten days, our two-member team visited three secondary schools, three colleges and one vocational institute covering five districts in Central and Eastern Bhutan”, she adds. “Students, particularly those involved in volunteering clubs such as scouting, environmental, or social service clubs, were invited to join our interactive workshops. The Royal University of Bhutan and a local NGO, the Tarayana Foundation, helped to connect with teachers in these different schools and institutes”.

After filling out the ballot, participants were asked to select their top priority –“good education”, for the majority – and think about how they as volunteers could help address that priority. “Student volunteers came up with very diverse ways to address the development priorities they had identified, such as helping elderly or children with less financial means, giving free tuition classes, planting trees and disposing waste properly, educating people, promoting organic farming, and solving problems by taking collective action together. For college students, we also explained how the MY World survey works and encouraged them to gather more votes from their community”, Riikka explains.

Wangdi Phuntsho, 22, was one of the active volunteers who coordinated the collection of MY World votes in his college, the Institute for Language and Cultural Studies in Taktse. After the post-2015 workshop in the college, seven student volunteers reached out to different people in the village – friends, neighbours, monks and shopkeepers – to involve them in this global discussion on people’s development priorities.

Wangdi believes that MY World is a good way to raise awareness on the work of the United Nations and on the sustainable development goals, although it requires special efforts to be communicated, for example, to illiterate people.

“I feel that the MY World survey gives an opportunity to people to share their views on development challenges and potential solutions. People expressed their gratitude for getting the chance to have their say through such an important survey. Also, decision-makers can better understand the real scenario at the grassroots level and plan accordingly”, Wangdi explains.

After this experience, Wangdi was even more motivated to volunteer. “MY World creates the space for youth volunteers to realize their roles in a rapidly changing world. We got to understand and feel the pain of local people as we interacted with them. It really inspired us to volunteer and help finding solutions for the difficulties faced by our community”, he notes. 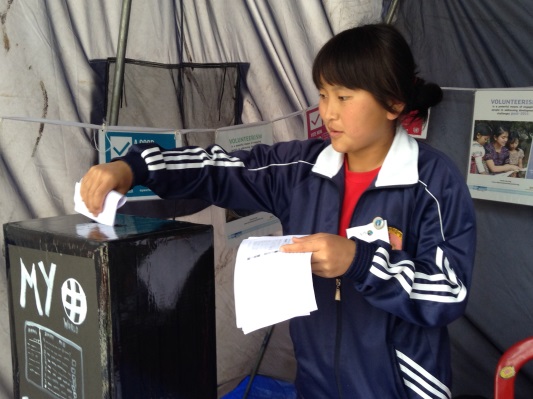 In just two months, the advocacy campaign – with the help of 40 youth volunteers mobilized to collect votes –raised the number of Bhutanese MY World votes from 200 to over 2 400, accounting for 0.4 percent of the total population. Good education, better health care and better job opportunities top the list of priorities in Bhutan so far.  The MY World survey has the possibility to add one’s own priority to the pre-selected list of 16 options.

At the MY World launch in Thimphu, early May 2014, 800 votes were collected. During the Post-2015 workshop sessions, about 500 students from eight different schools voted. 500 additional MY World votes were collected in conjunction with the student government elections at the Royal Thimphu College. 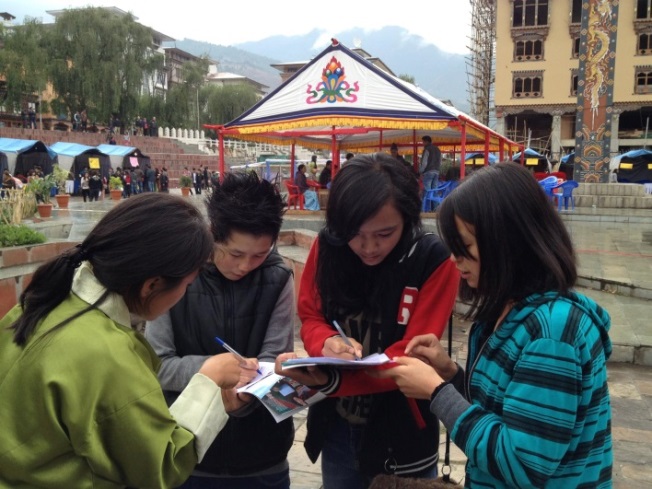 “Through MY World, Bhutanese have come up with unique suggestions for development priorities to be included, ranging from cultural preservation to ‘avoiding ego’, encouraging individual and collective attitude change, more focus on sports, and respecting the ideas of young people in decision-making”, Riikka notes, and concludes with a positive feeling: “During this campaign, I have most of all enjoyed sharing thoughts with Bhutanese young people. Based on these interactions with motivated, active youth volunteers, I am fully convinced that Bhutan has a very bright future ahead.”

Riikka Suhonen, an international UN Volunteer, worked as the Post-2015 National Coordinator/Local Engagement Officer in the Secretariat for the New Development Paradigm (SNDP) from July 2013 to July 2014, and is now continuing her volunteer assignment in Bhutan for a second year as Communications and Resource Mobilization Officer in the UN Resident Coordinator’s Unit. Her assignment is funded by the Government of Finland, and at the moment she is the only UN Volunteer in Bhutan.