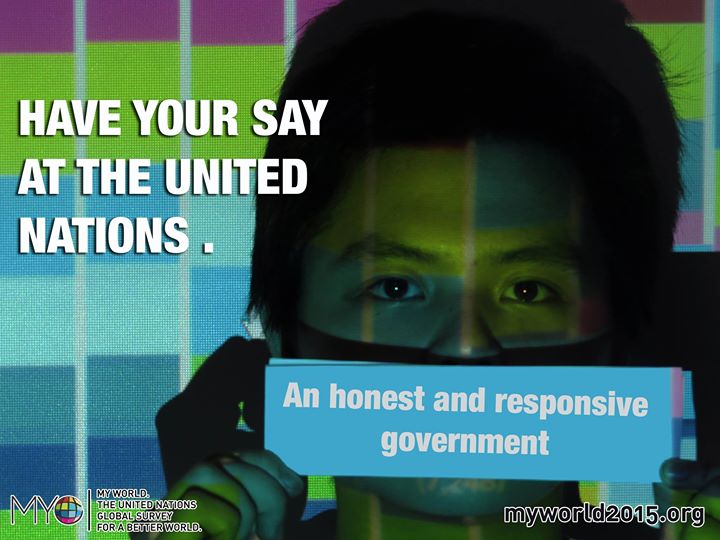 “Throughout history, progress has always been driven by citizens, who have the courage to raise their voices” – US President Barack Obama, Open Government Partnership Side-Event, 24 Sept. 2014

By empowering people around the world to have their priorities heard at the UN, the MY World 2015 Global survey has enabled a more transparent and accountable international development process – so perhaps it is unsurprising that these people have a similar aspiration for the openness and accountability of their own governments.  Out of the 16 MY World priorities, “An Honest and Responsive Government” is the 4th most voted for worldwide.

Disaggregated MY World Results on “An Honest and Responsive Governance” 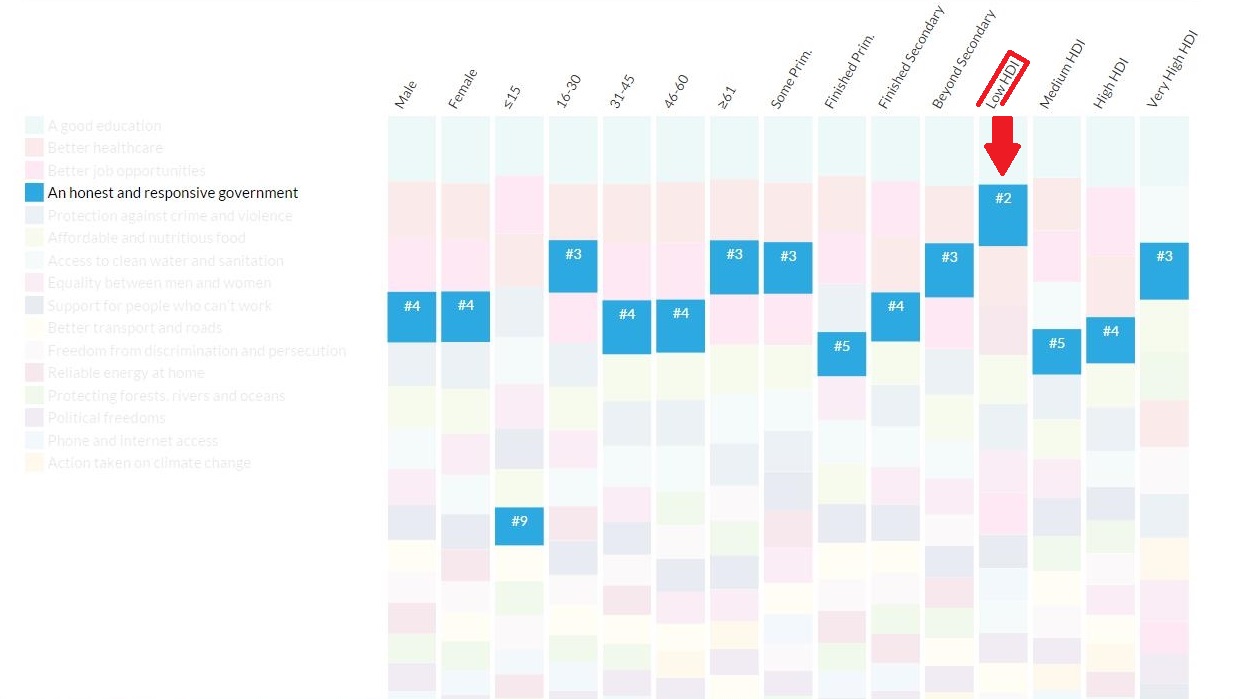 Furthermore, the MY World survey indicates that in low-HDI countries people feel that governance has a very real impact on their lives.  In these countries an honest and responsive government is the 2nd most voted for priority on average, indicating that governance and poverty are indeed linked. This linkage is backed up by research carried out by Transparency International showing a clear connection between poor governance and poverty.

The Millennium Development Goals, which expire in 2015, do not include a specific goal on good governance.  However, the same Transparency International research indicates that poor governance has significantly hindered MDG progress – in countries where many people report having to pay bribes, people are significantly more likely to be living in poverty (MDG 1), not finishing school (MDG 2), dying in childbirth (MDG 5) and childhood (MDG 4), and without access to toilets (MDG 7).

Moreover, people have reason to value good governance as an end in itself. A global thematic consultation on governance carried out by the UN Development Programme and the UN Office of the High Commissioner for Human Rights found that people valued governance not only as an enabler of development, but also as a stand-alone objective.

Learning from the gaps and weaknesses of the first Millennium Development Agenda, the proposed Sustainable Development Goals of the post-2015 agenda include a specific goal (Goal 16) which calls for accountable and inclusive institutions as well as justice for all.

During UN General Assembly week (September 21st– 27th) world leaders, members of civil society, and the private sector advocated loudly for this goal to remain embedded in the development agenda – and they often cited MY World results to argue this point. For example, while advocating for a specific post-2015 governance goal during a Transparency International and UK–hosted event, both UK Prime Minister David Cameron and UNDP Director Helen Clark took account of the fact that millions around the world have placed honest and responsive government as a top priority.

Another emerging theme is the impact of technology on accountability and transparency. This subject is particularly prominent in post-2015 discussions – even US President Barack Obama, speaking at a September 24th Open Government Partnership side-event, noted technology’s role in ensuring transparency and accountability, and also its ability to raise citizen participation in policy making.  In August, the Secretary General appointed an Independent Expert Advisory Group on the Data Revolution to provide recommendations on how to bring about a data revolution for sustainable development at the UN – their report will launch in early November.

World We Want 2015 Visualization – Governance in the Global Conversation 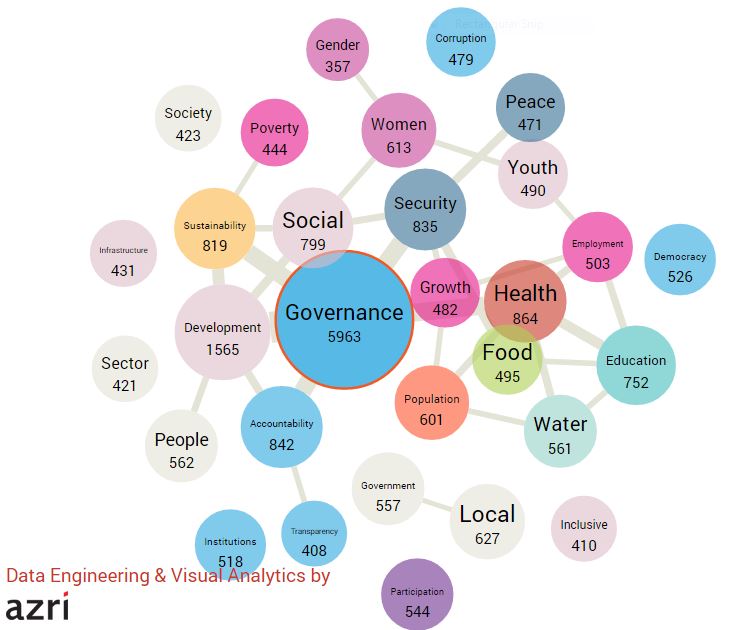 Implementing the new development agenda will require accurate, local, and up-to-date information which citizens and civil society can use to hold governments to account and advocate for the Sustainable Development Goals.  When a variety of actors participate in collecting and using data to drive action, this information can increase transparency and hold institutions accountable.  Using technology and data to increase citizen participation and oversight are the central ambitions of the MY World 2015 survey and the World We Want 2015 open consultation web platform.

The importance of amplifying people’s voices does not stop in 2015 when the UN decides on a new development agenda – The sustainability of these new goals hinges upon the engagement of all to ensure the successful implementation of the post-2015 development agenda. 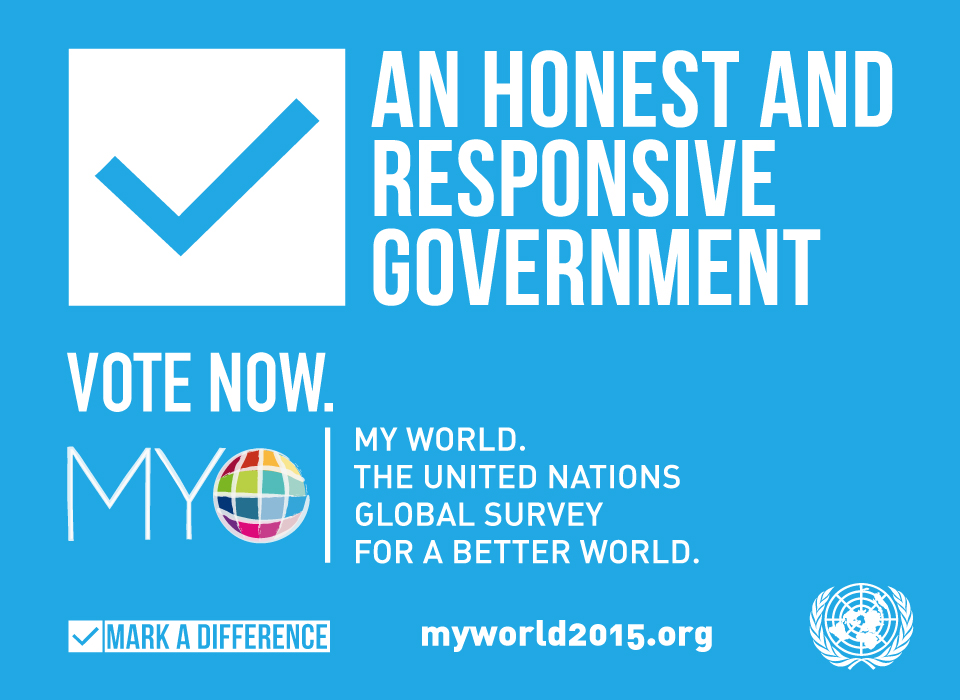