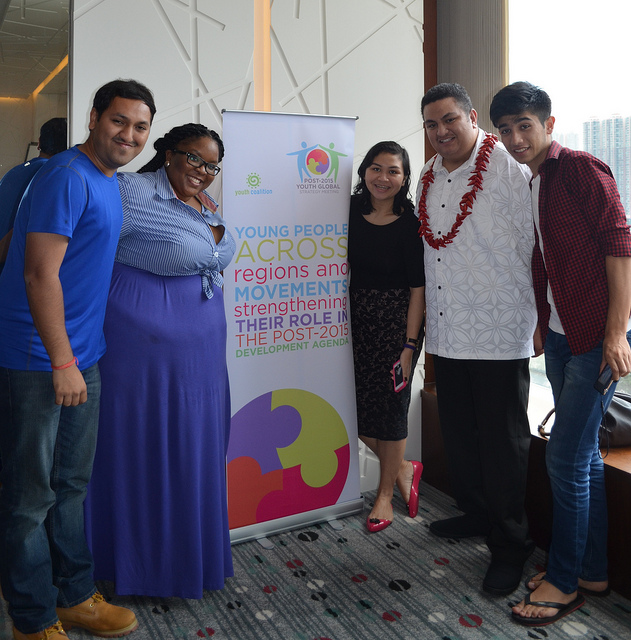 At the 2010 High‐level Plenary Meeting of the UN General Assembly to review progress towards the Millennium Development Goals (MDG), governments called not only for accelerating progress, but also for thinking on ways to advance the UN development agenda beyond 2015. This is the origin of the discussions now underway on the Post‐2015 Development Agenda.

The United Nations does not own the global development agenda; its membership includes all governments, its mandate covers the range of issues for international cooperation, and its methods of work are open in various ways of engagement with and participation by many other types of stakeholders.

Given that the MDGs farthest from being met are the two goals focusing on women and girls, it is clear that a business-as-usual approach to gender equality and sexual and reproductive health and rights will no longer suffice.

The largest generation of young people the world has ever known is poised to inherit and champion our next development agenda. If the post-2015 development agenda is to be truly grounded in human rights and the principles of equality and non-discrimination, and if young people are truly to be the custodians of this agenda, member states must redouble their efforts between now and 2015 to achieve gender equality and universal access to sexual and reproductive health, and to capitalize on this momentum as we continue to shape a transformative Post-2015 agenda.

No group in the global population has more at stake after the MDG deadline of 2015 than children and young people. That would seem obvious, but predictions vary widely on what kind of a world these young people will inherit and how they are prepared for whatever happens.

The Population Reference Bureau, with support from the USAID, has taken a close look at the 10-24 year old population worldwide and prepared a poster-size chart of statistics, called the World’s Youth 2013 Data Sheet. The newly collected information available in recent years points to a generation of young people with better health and more education. That’s the good news. The not-so-good news is that many in this age group in poor countries face social, health and economic barriers that in years to come will have profound effects on their own lives and their societies. Once again, facts show that girls and young women are most at risk.

The largest contributors to the My World survey have been youth worldwide; about 70% of respondents both offline and online are young people below the age of 30 years old. Survey results point to new issues which will need to be included in the future development agenda, including better job opportunities and an honest and responsive government –  all of which were discussed during the Post-2015 Youth Global Strategy Meeting in Hong Kong.

Young people are repeating many of the same messages, these voices, combined with the three million people coming together in the My World survey tell us that we have a big and urgent job ahead: to agree on a new development agenda that carries the same simplicity and strength as the MDG framework – an agenda that serves both people and the planet. A new era demands a new vision.

The good news is a global movement is coming together for 2015 and the future.

The aspiration of the development agenda beyond 2015 is to create a just and prosperous world where all people exercise their rights and live with dignity and hope. Which world do you want to live in by 2030? Which world it will be will depend on the decisions you help to make in 2015, and the preparations we make for it now.

To find out how you can still get involved, check out Kelly Thompson’s blog

*Saket Mani is the Global Youth Advocate for the My World 2015 and World We Want 2015. He is a member of the UNICEF Global Youth Council on the Global Partnership on Children with Disabilities and an active member of the UN Major Group for Children & Youth. He has been appointed as Global Youth Ambassador for “A World at School” by Gordon Brown (UN Special Envoy on Education) and Sarah Brown to promote universal education. He is an Ambassador for “Young Men 4 Gender Equality” to raise awareness about gender equality using technology and an advisor for “TakingITGlobal.”