Today, I would like to talk about the person who changed my dream of working for development on a global level into reality. He is the person tp whom I give all the credit. He has been a strong pillar to support me in my initiatives and has helped me implement them as planned. He’s the sole reason of the fruit of my efforts. I owe my success in the MY World 2015 and the World We Want 2015 campaigns entirely to this great mentor. He’s the one who also made me realise that women and youth should be involved in this project in order to get the desired outcome. He is none other than Mr. Ravi Karkara Ji. Even a hundred words would be less to express my gratitude towards this great personality. Thanks a million Ravi ji.

‘A youth is the nation’s blood and the architect of tomorrow’s world’.

I indeed feel honoured and privileged to work as a Global Youth Advocate for the My World 2015, and World We Want 2015 campaigns. This came about through my inspiring meeting with Ravi Ji. To live up to the responsibility envisaged upon me as a Global Youth Advocate, I have concentrated my entire focus on involving people from different strata of the society, as well as other initiatives to mobilise and strengthen the campaign. For the same, I have collaborated with Radio Channels, Technical Book Publishers, over 50 educational institutes, hospitals, Private Sectors, NGO’s , political representatives especially women and youth , government schools from rural areas etc. for the promotion of the campaign and thereby motivate people to bring about the change through My World 2015 and World We Want 2015 Campaigns . 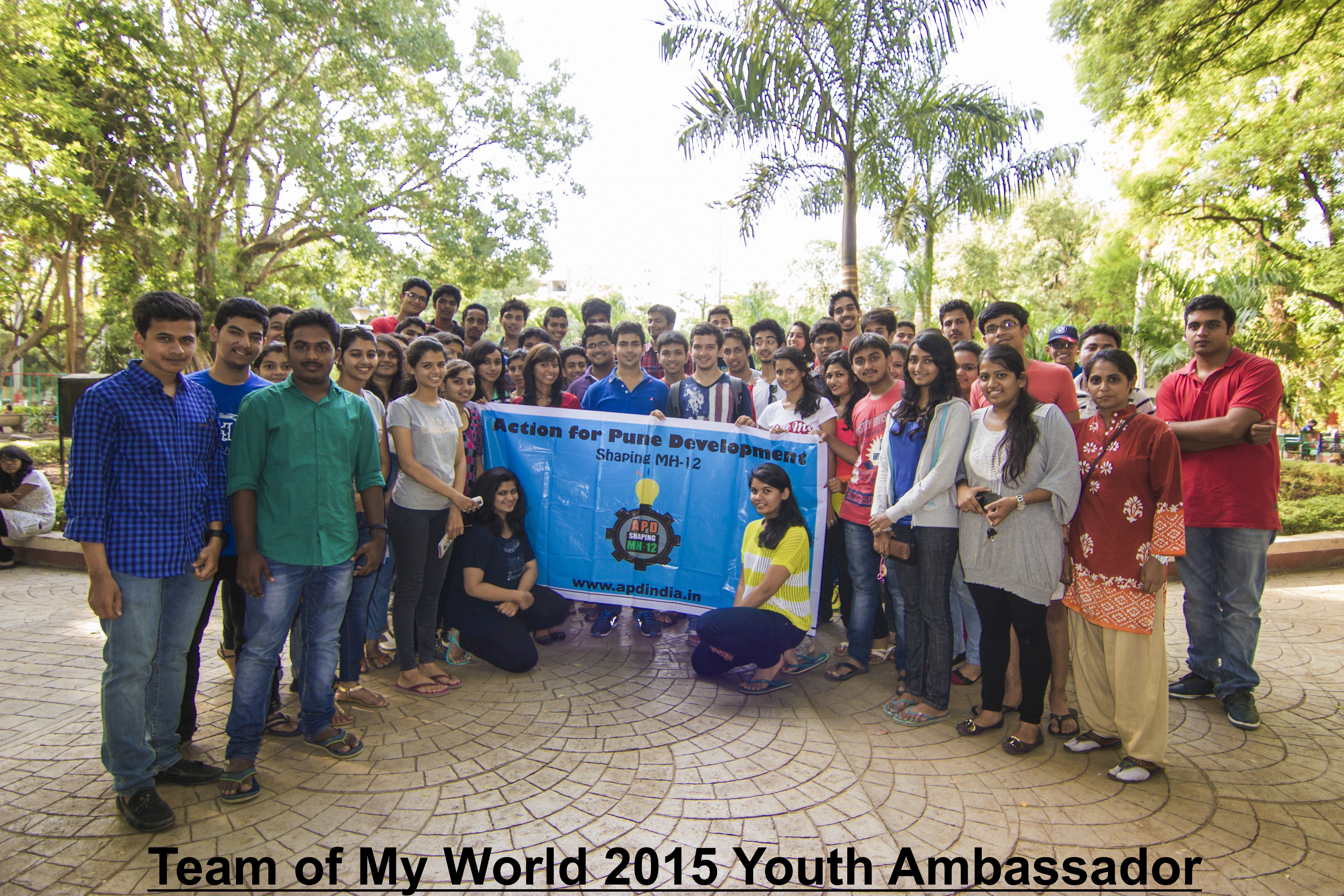 To initialise, more than 50 MY World and World We Want Youth Ambassadors have been appointed within Pune City who emphasize and promote awareness about the importance of this campaign. In order to give it a larger platform and conceptualize each priority in the ‘MY WORLD 2015’ survey, we organise various events in public areas that deal with specific priorities in order to optimise the interest and understanding of each priority.

To mention a few, we organised a book donation drive to make people further understand the priority of ‘A Good Education’. A large number of people participated and donated 1570 books which were then given to the needy & under-privileged students from the remote areas of India. On the same note, a ‘Tree Plantation Drive’ was organised on World Environment Day to support the priority of ‘Protecting Forest, Rivers and Ocean’ and more than 300 saplings were planted. 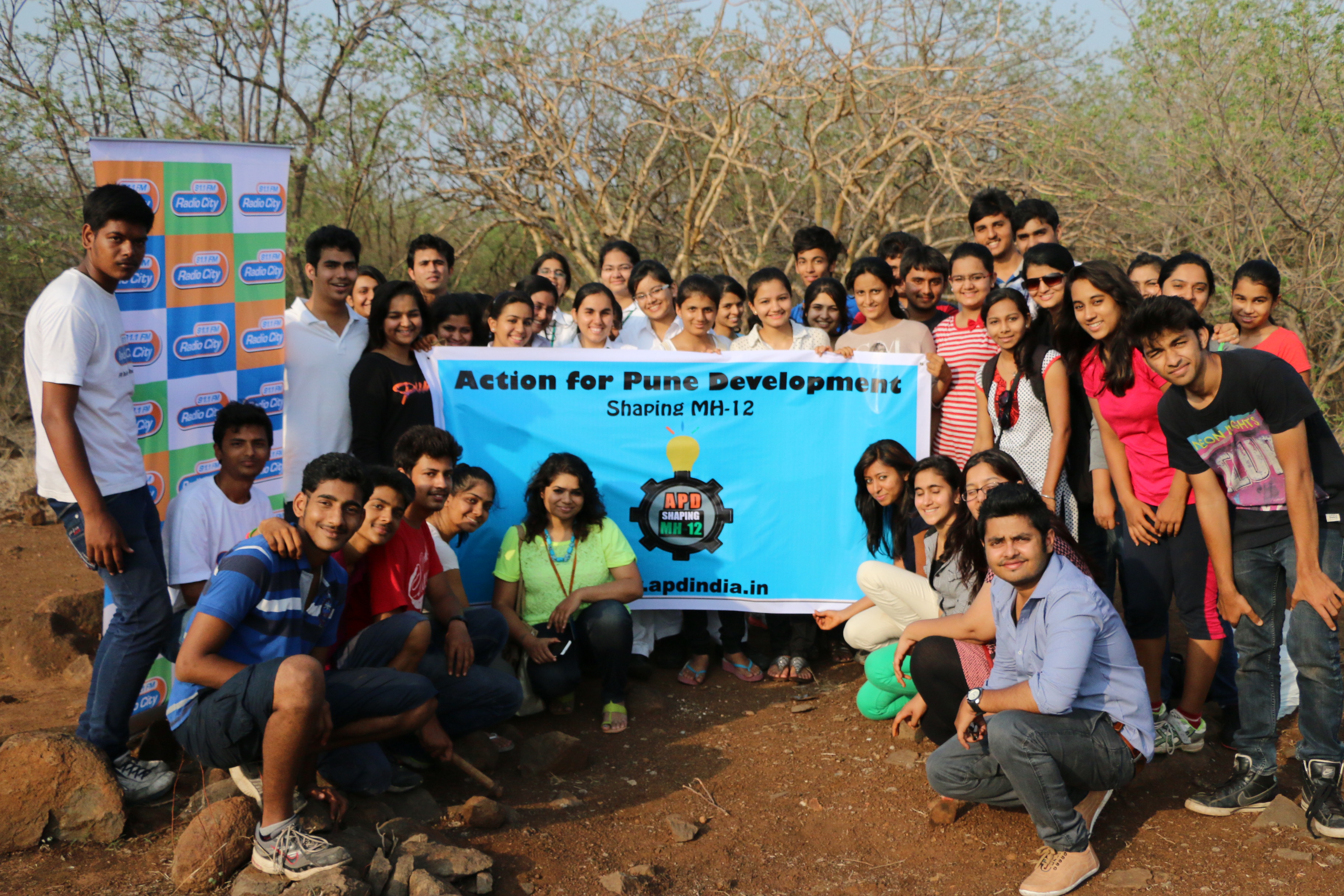 In order to emphasize the participation of the young generation in this campaign, we have collaborated with over 50 educational institutes; each having a minimum of 1000 students. Every student is given the responsibility to collect at least 10 votes. With this, we hope to accelerate the feedback regarding the concerns of the youth population. We expect to reach around half a million people through this initiative. 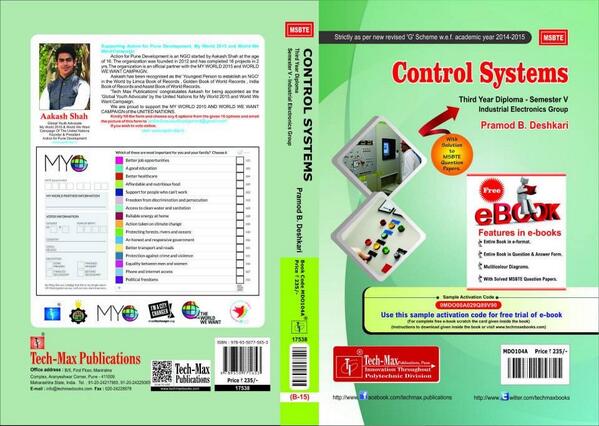 To broaden the scope of the campaign, we also have collaborated with Tech-max Publications, who are supporting the cause by publishing My World 2015 ballot on the back cover of the books of engineering and commerce streams. We hope to reach out to over 450,000 (four hundred and fifty thousand) students pursuing engineering and other commerce related fields throughout India. These students will also promote the MY World 2015 survey using their website and android/ IOS applications. We have also approached over 350 book stores who are promoting this campaign by getting the MY World 2015 ballot forms filled by the customers. 5 Youth Ambassadors have been appointed for collaborating with various corporations and Multi-National Companies whereby we reach to the highly educated masses. We appeal to the employees working in those companies to vote and strengthen the campaign.

Our youth ambassadors visit hospitals and interact with the patients in order to understand what their priorities and needs are. Currently we have teamed up with ‘Ruby Hall Clinic’- a renowned health care centre in Pune. We visit economically challenged sections of the society on a regular basis and conduct awareness campaigns in the local languages to educate them on the purpose of My World 2015 and World We Want campaigns.

It is the need of the hour to acknowledge gender equality. We hence have included women in this campaign on a larger scale and look forward to them as potential change makers. We strongly support Beijing +20 Campaign. We have involved various multifaceted personalities from different segments of society to participate in the campaigns and it gives me immense pleasure to inform you that, through our collaborated efforts, their opinions can be put forward at the United Nations. Currently, our focus is led on offline voting whereby we expect to reach to 1 million people by the end of 2014. Through this platform we intend to give the common man the power of being heard at the United Nations. We have concentrated mainly on youth population, as we strongly believe that ’Youth is the vital element to bring about any change as he has a past to learn from and a future to look forward to create a better tomorrow!

I am thankful to Ms. Corinne Woods and Mr. Ravi Karkara for entrusting the responsibility of Global Youth Advocate for My World 2015 and World We Want upon me which is helping me shoulder this huge responsibility with utmost satisfaction and has helped me evolve to be a more responsible person and broaden my perspective to a greater extent.

See the results from APD