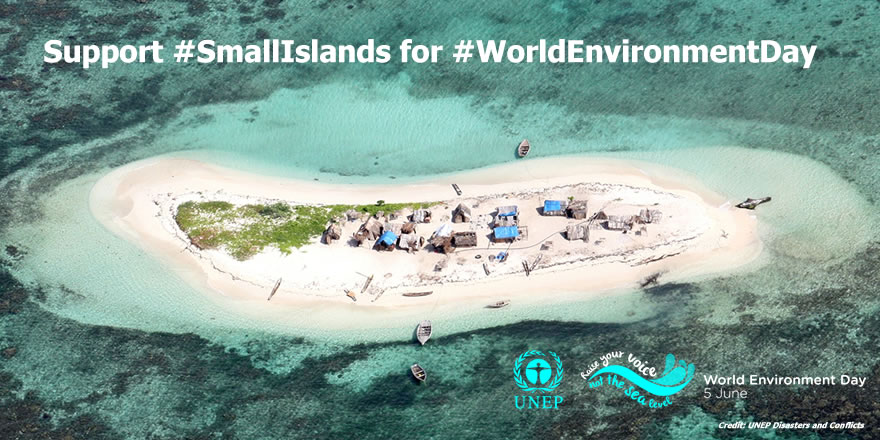 “Planet Earth is our shared island, let us join forces to protect it.”
UN Secretary-General Ban Ki-moon at the launch of the 2014 International Year of Small Islands and Developing States

June 5th has been designated by the United Nations as World Environment Day (WED). It is the United Nations’ principal vehicle for encouraging worldwide awareness and action for the environment. This year’s theme is “Small Island Developing States (SIDS) and Climate Change.” SIDS are low-lying coastal countries that tend to share similar sustainable development challenges and growing risks and vulnerability, particularly as a result of climate change.

UNEP Goodwill Ambassadors Gisele Bündchen, Don Cheadle, Ian Somerhalder and Yaya Touré are sending an SOS to the world on behalf of Small Island Developing States. Their message in the bottle: “We are all connected. The challenges faced by islands will face us all. So, every action we take to reduce waste and mitigate climate change counts. Join one of our teams and pledge to make a difference by taking action for WED.” See The Challenge for more information. 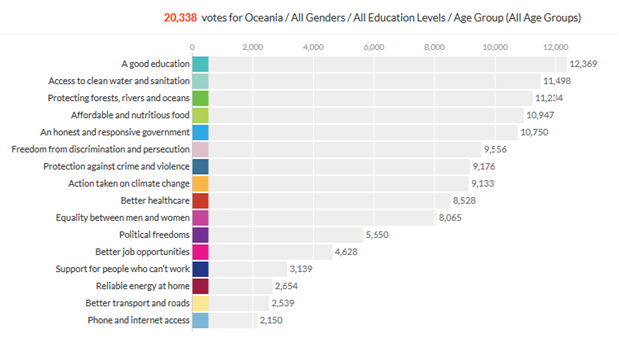 Similarly, MY World results show that as countries move from Low HDI to a Very High HDI, these three priorities move upwards. “Action taken on climate change,’ ‘Access to clean water and sanitation’ and Protecting forests, rivers and oceans’, move into the top ten priorities for countries with a Very High HDI. 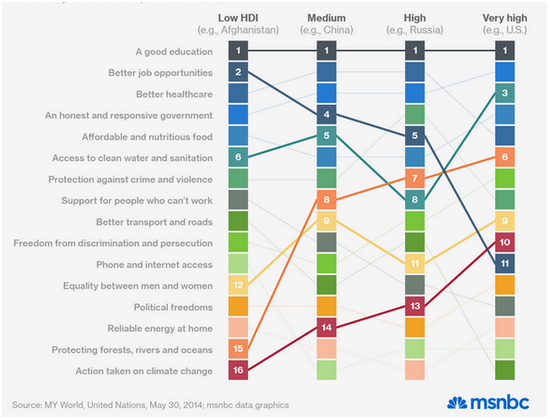 In recent remarks by the Secretary-General in Belgium on Climate Change at the Policy Spotlight, attention was called to the critical need and value of people voices when he announced:

Your voices are critical.

We are at a critical juncture in efforts to address the climate challenge.

The road ahead includes the Climate Summit in September, the Lima conference in December, and the Paris conference a year from then.”

MY World continues to be an opportunity for global citizens to bring environmental priorities to the forefront in the Sustainable Development Goals.

Showcased by UNEP for World Environmental Day are inspiring examples of Youth activities in SIDS, Gender and climate action in SIDS, SIDS and Adaptation, as well as opportunities under the Climate Change Convention.