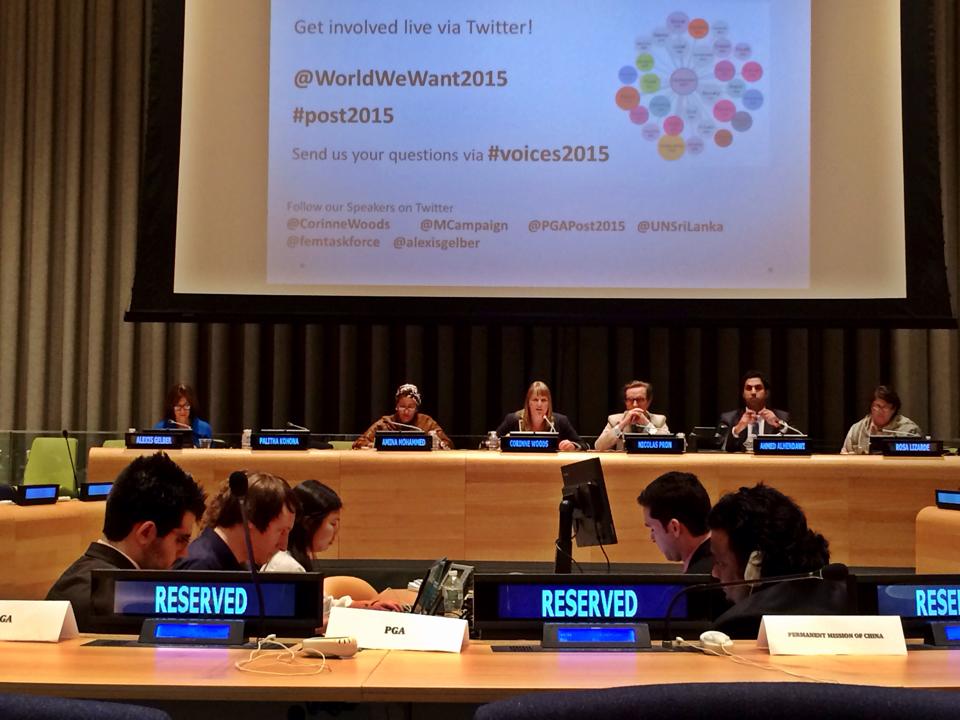 New York On May 16th 2014, the World We Want 2015 (WWW2015) Policy Strategy Group hosted an event to launch the new Trends and Outcomes Page of the worldwewant2015.org called “Visualizing People’s Voices: Data By People For People” at the United Nations Trusteeship Council. The World We Want 2015 enables people to engage, visualise and analyse people’s voices on sustainable development.

In his opening remarks, Mr. Pron said the event gave “member states and stakeholders yet another chance to learn about the World We Want [2015]. The PGA held an interactive briefing with civil society and told the audience ‘they had an equal voice and you will be heard.’” The World We Want 2015 is created by the United Nations and civil society to amplify peoples’ voices in the process of building a more representative global agenda for sustainable development.

Mr. Alhendawi reflected on the urgency to address issues such as climate change and spoke about the role of youth in becoming true global citizens. He articulated, “development is about people and the planet, we must make sure present and future generations reach their true potential.” Ms. Mohammed also stressed the important role of youth, highlighting “the heavy lifting of this agenda is for youth, because those age 15 will be age 30 in 2030.”

Led by the Policy Strategy Group for WWW2015,  formed by various civil society organizations and UN institutions, and coordinated by the United Nations Millennium Campaign, the platform feeds into the post-2015 discussion by enhancing civil society’s participation, ensuring that peoples’ voices are taken into account when drafting the new development agenda. The newly developed online platform features trends and outcomes from national and thematic consultations through an ongoing dialogue with civil society, academia and private global citizens. Rosa Lizarde, Global Director of Feminist Task Force, serving as Policy Strategy Group WWW 2015 Co-chair, represented civil society and the Policy Strategy Group, “which aims to bridge the digital divide through the launch of data visualisation.”

The launch ushers in a new phase for the World We Want 2015 from a consultation focused web platform to data curation, analytics and visualization. Ms. Gelber noted, “Data visualization is the new kind of storytelling.”

In Ms. Wood’s concluding remarks she emphasized the importance of face-to-face interaction for My World engagement; the World We Want 2015 platform is a place for local solutions to be shared and learnt from, a space for open-knowledge, open-data, and cooperation. Thanks to data-mining and visualization technology, and through quantitative and qualitative analysis, this space is meant to create a virtuous cycle for Sustainable Development.

For more information on the World We Want 2015 Trends please visit: http://www.worldwewant2015.org/www2015_trends_outcomes 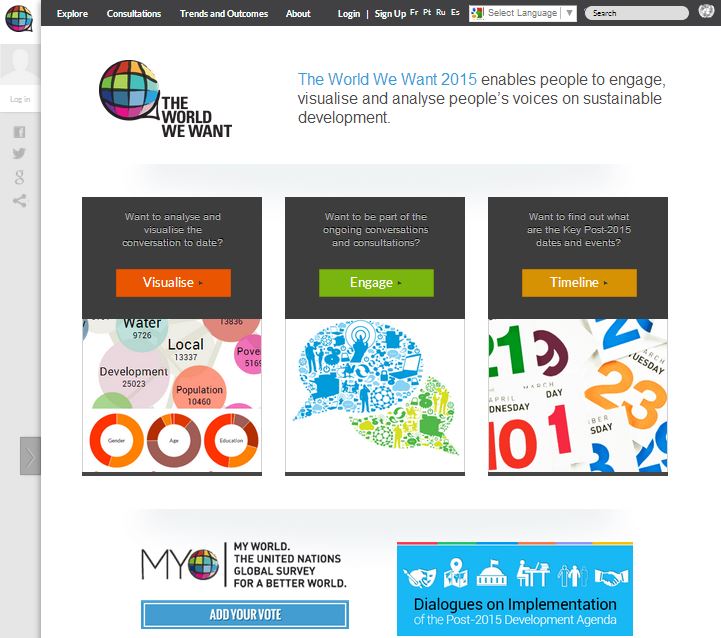