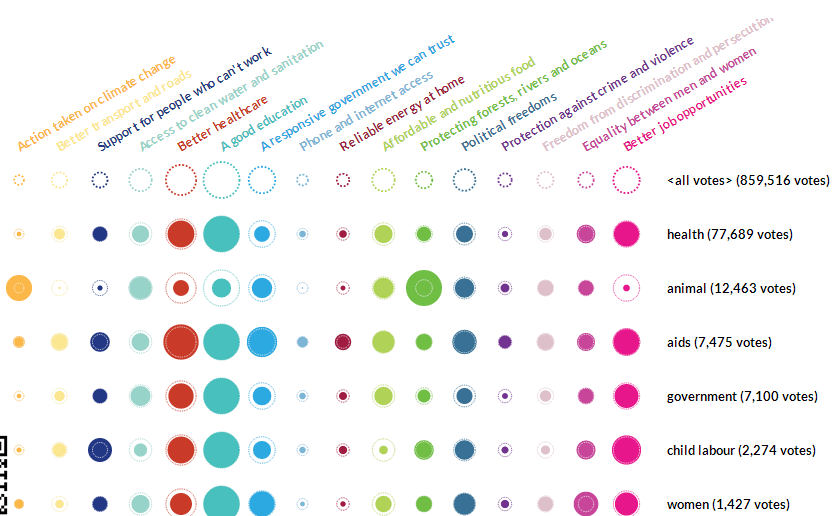 As the MY World votes increase, so do the ways we can look at the data.  Out of more than 1.2 million votes worldwide, more than 100,000 people opted to write in to the free text ’17th option’. Many of these comments reinforced issues voted on in the 16 priorities – education, heath, jobs – but some additional and more nuanced issues have been raised including animal rights, child labor and HIV/AIDS.

Complementing the existing MY World analytic page and heat map his new visualization by researchers at NYU Poly, created in collaboration with UN Global Pulse, shows the most common phrases entered in the open option and how people voted on the MY World 16 options in relation when they raised additional issues. For example, the visualization shows that people who raised the issue of animal rights, were less likely to vote on better job opportunities than the global average. Comparatively, people who raised the issue of child labor were more likely to vote on support for people who can’t vote.  The page also features a search function allowing you to search any term, in any language, to see how frequently it has been entered and the supporting data. A search for nuclear disarmament for example shows that 145 voters raised this issue in the voting and a search for ‘paz’ (peace in Spanish) shows 114 votes. Additionally, for each entered search term the most common co-occurring terms are given as well as the most common original text entries. For example when searching for HIV it shows the most common occurring phrase is “end HIV”.

* Dr. Hendrik Strobelt of NYU Poly developed this analytical tool which is currently on show at the Danny Kaye Exhibition Center in UNICEF House and can be tested online at: http://hendrik.strobelt.com/Prio17Combined/
* The visualization is created by using D3.js and the data is stored in Apache Solr index/database.