YASR, Youth Action for Social Responsibility, is one of the many MY World partners in India. This organization has distributed our survey across the nation, specifically in the district of Panna, a municipality in the state of Madhya Pradesh famous for it’s natural resources and wildlife reserves. Reaching out to over 1,000 individuals in this tribal community, YASR spent several days informing and engaging local families on the MY World initiative, and educating them on the Millennium Development Goals and Post-2015 process.

In an effort to allow for greater social inclusion, YASR converted the MY World survey into Hindi and other variations of the local dialect. Due to the remote and isolated nature of the region, YASR concentrated their advocacy efforts in public spaces such as: tea shops, temples and places of worship, educational institutions( most notably Praxis Classes Basti in Uttar Pradesh), governmental offices, markets and centers of local commerce, shelters for women, and local town meetings. They found, within their experience, also great success of mobilization surrounding playgrounds, an ideal setting by which to engage youth and their families in a positive manner. What most engaged the youth was a discussion of hunger and poverty, and the paramount importance to alleviate these concerns within Indian society for post 2015 agenda.

YASR was able to achieve further engagement of citizens in MY World by affirming the fact that these men and women had a right to free speech, and now an avenue by which to share their opinions globally. YASR mobilizers also provided tutorials regarding the information put forth in the MY World data set, carefully explaining to individuals India’s current priorities, and comparing them to those of other countries abroad. The individuals surveyed most pressing concern was, MY World priority 106, an honest and responsive government though hunger and poverty were also expressed as a major concern.

YASR is an organization headed by founder Sushant Kumar Pandey, and aimed at educating rural youth on the possibility and positive consequences of peace and disruption of conflict both at home and abroad. The organization currently operates globally in 13 countries, efforts are directed by 200 members, and they have so far reached out to some 20,000 people advocating for the cause of peace, sustainability, and understanding. We thank YASR for their continued support, and recognize their valiant effort in bringing the hopes of the United Nations to the most marginalized of communities. 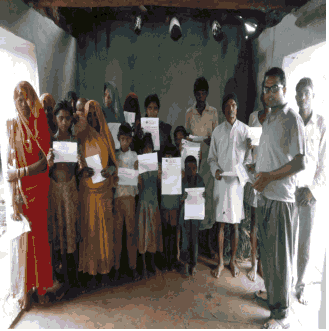 3 thoughts on “Reaching out to the most marginalized in India”