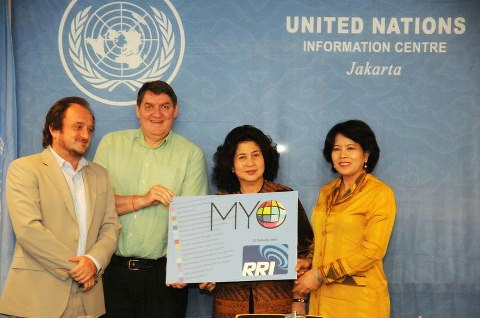 In Jakarta, in collaboration with Radio Repubik Indonesia (RRI) and UN agencies in country, MY World is being rolled out to thousands of Indonesians offline and online. Speaking at the launch, UN Resident Coordinator, Douglas Broderick said that partnerships with government, civil societies, corporations, and within the UN system would play an important role in ensuring open and inclusive participation in the post-2015 process.  At the event 3000 ballots were handed over to RRI for distribution to their offices nationwide. Following on from the launch, RRI broadcast a special program on MY World and the importance of civic participation across the country in both English and Bahasa Indonesian.
At the most recent gathering of the High Level Panel on Post-2015 in Bali, meetings were held with civil society organizations and private sector companies to support collaboration in extending civic participation in the Post-2015 discussion. Youth volunteers from Denpasar and surrounding areas actively contributed to this effort by attending the desk, distributing and collecting the survey ballots, promoting the online survey, and assisting participants who wished to engage as MY World partner. A big thank you to all the MY World volunteers who assisted!
At Budi Luhur University students and faculty will work together to promote MY World, both within the student body, by setting up MY World survey stations on-campus in student areas and issuing a MY World ballot card to every senior at their upcoming class graduation this spring. The university aims to reach its entire student population with the survey over the coming months and will train students to distribute MY World to remote communities in Yogyakarta and elsewhere through its civic engagement programs. By equipping students to reach out to marginalized communities, Budi Luhur University contributes greatly to the goal of giving every Indonesian the chance to add their voice to the global conversation on the Post-2015 development agenda.

In addition, thematic consultations were held as part of the Post-2015 conversation on Environmental Sustainability, Inequality and Conflict and Fragility. At each consultation, participants voted on MY World with many registering to sign up as official outreach partners,  dedicated to reaching out to marginalized groups across the archipelago. The consultations generated hundreds of votes, more than 40 new partner organizations and a greater understanding by all, of how MY World can enhance Indonesian voices in the global Post-2015 conversation.