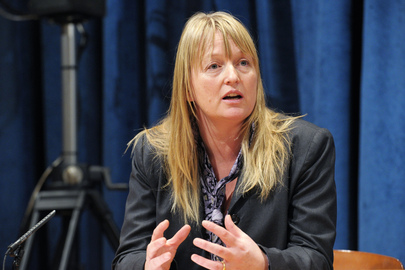 During her stay in the country, between April 2nd and 5th, Ms. Woods will meet young girls, slum dwellers and indigenous communities to listen to their claims and visions for the new development agenda to be in place after the expiration of the Millennium Development Goals in 2015.  Brazil’s national consultations for the post-2015 scenario are being facilitated by the United Nations in collaboration with the Government. The results of the consultations will be submitted to the High- Level Panel that will produce the report to the UN Secretary-General to advise him on the post-2015 global development agenda.

On the first day of her trip, Ms. Woods will meet with the youth in the community of Borel in the northern zone of Rio de Janeiro; on Wednesday (April 3rd), also in Rio, her focus will be an event with young girls that will count on the participation of Brazil’s Human Rights Minister, Maria do Rosario.

On Thursday (4), the Director travels to Brasilia where she is attending a public hearing with teenagers in the Human Rights Commission at the Federal Senate. On Friday (5), the last day of her visit to Brazil, she will meet with indigenous communities in Dourados, Mato Grosso do Sul, which are participating in the Joint Programme on “Food Security for Indigenous Women and Children in Brazil” (*).

The UN Millennium Campaign supports citizens’ efforts to pressure their governments to implement the Millennium Development Goals (MDGs). It is also responsible to guarantee that the voices and concerns of citizens are heard in the planning of the post-2015global development agenda. Learn more at www.endpoverty2015.org/about